Serial entrepreneurs are a rare species. Even rarer are serial co-founders like Vincent Ricordeau, Ombline le Lasseur and Adrien Aumont. In 2009, the three French entrepreneurs co-founded rewards-based crowdfunding platform KissKissBankBank with a mission to “free creativity”. Since then, the platform has collected more than €30 million and financed over 14,000 projects. In 2013, the three entrepreneurs went on to start an interest-free peer to peer lending platform called hellomerci designed to finance small projects through crowdsourced interest-free loans of under €10,000. At the end of 2014, the trio did it again and launched a peer-to-business lending platform, Lendopolis. Their ultimate goal is to propose to investors and small businesses a complete set of investment/financing solutions.

I spoke with Vincent Ricordeau, one of the three co-founders KissKissBankBank, hellomerci and now the CEO of Lendopolis.

Therese: Prior to Lendopolis, you launched two crowdfunding platforms KissKissbankBank and hellomerci, how are these platforms developing? 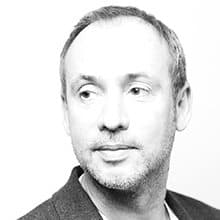 Vincent: Back in 2009, we founded KissKissBankBank because, coming from the media and music industries, we could see that artists and other creative people were struggling to raise funds to finance their projects. Our motto became: “Let’s free creativity”. We’ve been pretty successful at it, as KissKissBankBank’s numbers show: more than half a million KissKissBankBank members have funded more than 14,000 projects for over €30 million.

But KissKissBankBank also made us realize that the lack of project funding and seedfunding was not limited to creative artists. The financial system leaves a lot of people behind. People as diverse as parents looking for money to create a neighborhood kindergarten or a pastry chef who needs to extend its kitchen lab to launch a new line of pastries called the “éclair au chocolat”. Micro-businesses and budding entrepreneurs are spurned by the banking system.

This is why we created hellomerci, an interest-free P2P lending platform in 2013. hellomerci’s baseline is “Borrow from those who care”. People use the platform to borrow a few thousand euros from family and friends to start a new business or a new line of business.

hellomerci’s numbers are small, firstly because its interest-free loans are capped at €10,000. Secondly, we are extremely selective. We accept less than one in ten projects. We require from borrowers strong references proving that have the capacity to repay the loan.  In addition, we display only projects with at least 4 backers. This explains why the platform has a 61% success rate, and an astounding repayment rate of 100%!

Therese: Most recently, at the end of 2014, you launched the P2P lending platform Lendopolis. Isn’t it a step change from your previous ventures? Isn’t interest-bearing lending a different trade? 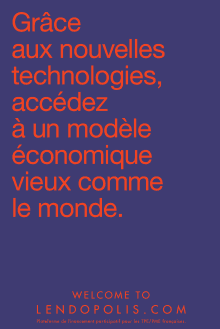 Vincent: On the contrary, we see a strong continuity across our businesses.

Through our previous ventures, we were able to support many successful businesses. But we couldn’t help them move to the next stage. We couldn’t help entrepreneurs looking for serious money, beyond family and friends.

We see Lendopolis, as the third leg of our set of crowdfunding solutions. It gives to project owners the ability to raise more money. It also gives project funders more opportunities to use us. The viral nature of creative projects makes it easy to recruit large numbers of new users for reward-based crowdfunding, but these users do not often come back for more. Interest-bearing crowdlending may be less viral, but it makes lenders come back again and again to invest their savings.

Lendopolis strongly benefits from the experience we’ve acquired launching the two other platforms.

We have learned a lot about how to launch new platforms. So far, Lendopolis is growing at the same pace as hellomerci, but it is already much bigger because the loans are much bigger, on average between €50K and €60K. The average lender contribution is €400 to €500 euros, which is 10 times higher than the same metric on the rewards-based platform. The success rate, based on projects with 4 backers or more, is 75%. Our previous ventures have shown that these early metrics tend to be stable in the long run. 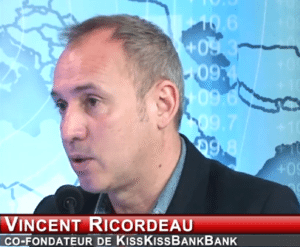 We also learned quite a lot from hellomerci about how to screen loan applications to minimize the default risk. Banks claim that they’re the only ones able to manage credit risk, but the crisis has proven that they are not doing such a great job. Together with the French Association of Certified Accountants , we have developed standards that enable SMBs to present audited financial data. We have also developed our own tools to analyze businesses and business sectors, and we believe that we can develop more tools in the future.

To recruit SMBs looking for funding, we’re also partnering with institutions like Initiative France as well as with several media groups. Whereas rewards-based crowdfunding KissKissBankBank is quite international, Lendopolis is focused on the French national market.

At the end of the day, crowdfunding, be it donation, lending or equity-based, is basically about one and the same idea: to empower entrepreneurs and to enable consumers to see and decide where their money goes.

Therese: What are the next steps for you as entrepreneurs?

Vincent: Because we don’t come from the finance world, we’re going to try to keep working in the same spirit, the true spirit of crowdfunding.

We want to create a vortex, bring things in motions, finance creativity and free it from the diktats of producers, banks and other gatekeepers. We want to create a real direct exchange between the public and the enterprise and give back to consumers the power do decide where their money goes. On many lending platforms, such as Prêt d’Union in France or Funding Circle with “autobid” in the UK, investors do not select individual projects. A lot of crowdfunding is turning into selling funds. It’s slightly less opaque than banking, but it’s not fully crowdfunding.

For us crowdfunding is not only a fashionable packaging. The true crowdfunding experience gives lenders an emotional return as well as an economic return. To achieve this, Lendopolis offers features like the ability to discuss with the project owner, the company CEO. The people decide which projects get funded and which do not.

We’ve been called idealist but we’re realists. There is a need. Consumers want new benchmarks. We believe in the collective intelligence. We want to curb the tendency to dehumanize relationships and recreate direct links between people. We believe that individual investors can both meet their profitability targets and give their money a meaningful purpose.

Our ideal, our ultimate goal would be that each Frenchman or woman lends a few thousand euros per year through crowdfunding. In the same vein as family offices are migrating from traditional assets to directly investing in businesses, we would like every Frenchman or woman to start investing their money in the real economy. It’s a tough goal to achieve, but it is not impossible. In any case, we intend to create whatever financial vehicles have the strongest appeal to help consumers do that.

The market potential is huge, and we are not shy.