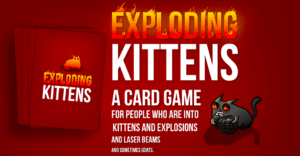 Ready to give backers a “progress report,” the team of Kickstarter-success Exploding Kittens has unveiled playtest results of the game being played thousands of times.

Last month, the game’s creators, the Oatmeal’s Matthew Inman along with Xbox’s Elan Lee and Shane Small, put the power in the hands of backers and asked them to give some feedback before the final version’s summer release. Seven Canadian cities were selected to participate in the game playing experiment.

Below shows the details of the playtest.