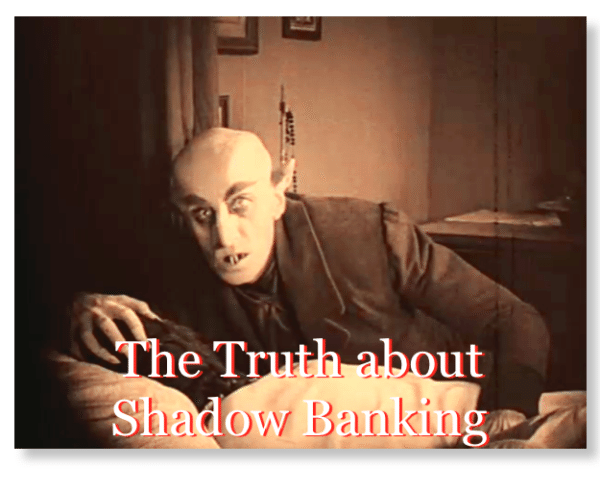 For years now, big bank lenders have warned the public about the dangers of dealing with “shadow” (i.e. non-bank) lending institutions. The term itself conjures up images of shady back-room deals where you’re handed money in a paper bag and told to pay it back in a week, “or else!” To borrow a line from one of my favorite movies, the Usual Suspects, Shadow banking institutions “have become a myth, a spook story that banks tell their clients … leave us, and the shadow bankers will get you!” … However, with the astronomic recent rise of technology based, non-bank, lending alternatives such as peer-to-peer (P2P) lending, it’s really the big banks that should be afraid … very afraid! 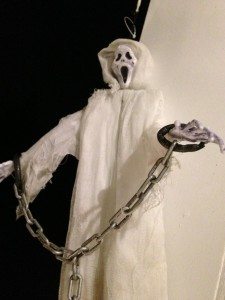 The term “shadow banking” was first coined by Paul McCulley, a former Pimco executive. It was originally used by McCulley to describe those non-bank lending institutions that played fast and loose with borrower qualifications and approved tons of easy-money financing for clearly unqualified borrowers. This of course led to the subprime mortgage market crash and subsequent financial crisis. As a result, it’s no wonder why this term carries such a dark connotation (get it … dark … shadow). Today the use of this term has broadened considerably and is often used to describe just about all non-bank lending institutions including: investment banks; structured investment vehicles; insurance companies; institutional investors; hedge funds; mutual funds; money market funds; P.E. funds;  crowdfunding and, of course, P2P lending.  The problem is that transparent models like P2P lending platforms do not operate in the “shadow” at all.

As Aaron Vermut, CEO of Prosper Marketplace (one of the largest P2P lending platforms), told CNBC in a recent interview: “We don’t consider ourselves to be quote, unquote, ‘shadow’ anything. …One of the things that’s unique about what we’re doing is we’re very, very transparent about what we’re doing, which is unusual in banking and lending.” Unusual is an understatement. The level of transparency present in the majority of P2P lending deals is unprecedented in the banking industry. For example, did you know that Prosper and LendingClub (the two largest P2P Lending platforms) offer over 200 data points for an investor to consider, including borrower’s: FICO scores; employment; income; etc. Moreover, with the use of the internet, any change or updates to such information can be readily incorporated into pricing calculations; something traditional banks have been unable or unwilling to do.

Let’s be clear, the real cause of the financial crisis was a lack of transparency not a lack of regulation. It’s absolutely true that certain non-regulated mortgage brokers/lending institutions contributed heavily to the market crash but they absolutely weren’t alone. Who do you think was buying and helping to sell the junk mortgage backed securities? … You guessed it, regulated banks (for a fantastic and hilarious visual summary of the Subprime mortgage crisis see “The Subprime Primer”). So, the fact that current P2P lending platforms and other fintech (i.e. internet based financial technologies) solutions are not regulated in the same manner that banks are does not necessarily make them something to be feared. In fact, all evidence points to the fact that borrowers and investors alike are flocking to these fintech platforms in droves due to their un-paralleled transparency and ease of use (among other things).

Beyond the improved transparency, there are several other factors that are making P2P lending and other fintech platforms more attractive to borrowers (and investors) than traditional banks:

For the above reasons (and others) the P2P lending industry is the now fastest growing sector of the non-bank lending industry according to a recent exhaustive Goldman Sachs report entitled “The Future of Finance: The Rise of the New Shadow Bank.” From roughly $26 million in loans in 2009, today the industry boasts an aggregate amount of loans in the $1.7 Billion dollar range. While a mere drop in the bucket of the estimated $12 Trillion dollar U.S. loan industry, the P2P lending industry has grown more than 65x in a span of only five years. That’s a hell of a jump! 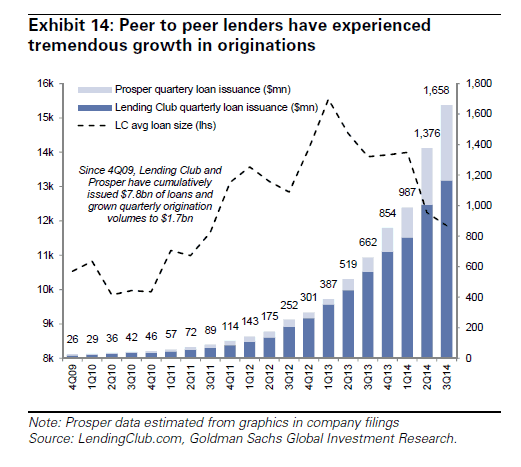 Moreover, the report (and analysts) predict that the growth will not just continue but get stronger; estimating that close to 8-10% of the traditional banking market are likely move to P2P lending and other non-bank alternatives over the next five years. To monetize that percentage range, 8-10% represents somewhere around $11 billion dollars.

As noted in the introduction to the Goldman Sachs report, “[f]om Lending Club to Quicken Loans, Kabbage to CommonBond, new faces and new names are impacting the way we bank and borrow. The twin forces of regulation and technology are opening the door for an expanding class of competitors to capture profit pools long controlled by banks.” Whether you call them “shadow banks,” “direct lenders,” “marketplace lenders,” “sunlight banks” or “Fred” it really doesn’t matter. As the report and industry analysts concur, the non-bank lending industry has risen like a phoenix from the ashes of the last financial crisis and those flames show no sign of burning out any time soon.

There are certain opponents and naysayers that believe P2P lending and similar institutions should be heavily regulated like traditional banks to avoid a subprime type of financial crisis from occurring again. To the extent such regulations would call for more/expanded transparency (like those suggested in the CFA Institute Report), I can agree that more information is always helpful but I truly believe that the industry is doing a great job of being transparent all on its own. Are there risks in making and investing in these loans? Of course! An Investor isn’t likely to be offered 10-25% returns on their money if the investment is fool proof. With risk comes reward; remember learning that in Finance 101? As long as the transaction is transparent though the investor can make their own risk/reward analysis and has only themselves to blame for making a bad investment. 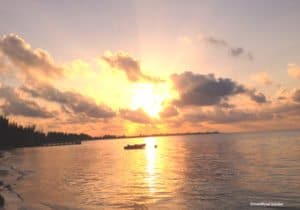 With the level of transparency in today’s so-called “shadow” lending market, a complete breakdown like the one that occurred with subprime mortgages is, in my opinion, remote. Even as market participants begin to securitize P2P and other fintech loans (such as BlackRock who put together a rated securitized instrument bank in January of this year), they are clearly not the same type of junk securities which were sold during the subprime crisis. The transparency of the underlying loans in these new “securitized” assets allow the purchasing investors to properly assess the true underlying credit risks and thus price the instrument accordingly. As a result, a loss of investment income will have been substantially expected and calculated into the investor’s projections which, in turn, will prevent a complete meltdown if the tides turn. This is a discussion for another time however.

What is clear is that today’s “shadow” lending market is here to stay and only becoming more supported and trusted by borrowers and investors. In Aaron Vermut’s CNBC interview noted above, he attempted to differentiate the new fintech based non-bank entities as “sunlight” institutions (as opposed to “shadow” institutions). To Aaron I say, forget wasting your time differentiating yourself and embrace being a “shadow” organization. It’s clear that the public trusts “shadow” entities today more than it does traditional banks. Moreover, if the Goldman Sachs predictions are correct, the only one who has anything to fear from “shadow” entities, is the traditional banking industry.