On Tuesday, MegaBots launched a crowdfunding campaign on Kickstarter to raise $500,000 for a U.S. vs. Japan giant robot duel. 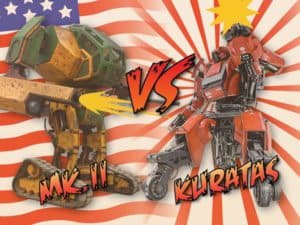 “We are MegaBots, Inc. We challenged Japan to a giant robot duel, and they accepted… but demanded that the fight include hand-to-hand combat. We say BRING IT ON. We’ve assembled an incredible team of patriots to help us upgrade the Mk.II into the robot America deserves in the world’s first giant robot fight, but we need your support to help pay for those upgrades!

“Right now, the existing Mk.II tops out at 2.5 mph and is built for long-range paintball combat. That means it has thin, destructible armor plates and a mesh canopy. The entire robot’s built to be ‘lightweight’ (if you can call 12,000 pounds light), and hand-to-hand fighting is a whole new level of combat.”

Items needed to bring the Mk.II include:

Basic upgrades will cost the $500,000. In order to win the fight, the robotic team must do the following: 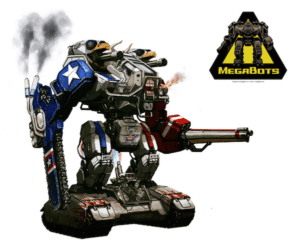 “Meeting our $500,000 goal means that we get to seriously overhaul the Mk.II. We’ll build the ridiculously cool weapon systems you see in our concept art, add the shock-mounted steel armor we need to survive multi-ton punches, beef up our hydraulic actuators to handle the additional weight of our armor and weapons, upgrade our power unit to provide 5x the horsepower to handle the additional power demands of our new hydraulic system, and then work with Howe & Howe Technologies to build a custom track base replacement that’ll make us 5x faster than we are now – which will end up making us 2x faster than KURATAS!”

Those that back the project will receive rewards such as Team USA crew shirts, posters, stickers, demo day visit, and a “swag kit.”

Since its launch on Tuesday, the project has successfully raised over $57,000. It is set to close on September 18th.