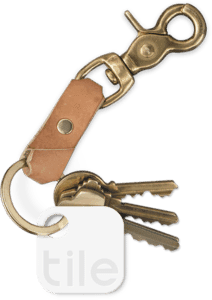 Tile, one of the most successful self-crowdfunding hardware campaigns of all time, has announced its 2nd generation product alongside a sizeable roll-out in over 3300 T-Mobile stores.

Tile, described as the “worlds largest lost and found”, quickly raised over $2.6 million in a pretail funding effort back in the summer of 2013. As of last June, Tile had delivered over 2 million devices and had captured millions of dollars in venture capital to support the young firms’ growth.  Now Tile is moving into the mainstream with broad retail distribution.  The second gen Tile is even more tightly interwoven into a users smartphone allowing Tile holders to use Tile to locate lost phones.

Having demoed several item finder devices, including the Tile, for short-range location Tile remains my favorite.  While missing a GPS location chip, Tile makes up for this with a tiny, yet elegant design, that is simple to use and consistently works. No more lost car keys.

The company also shared that Tile’s renewal program is ready to go for users looking to replace a used Tile. A single Tile is listed at $25 but discounts apply once you pick up 4 or more.