A little over a week and a half ago, New York-based graphic designers Jesse Reed and Hamish Smyth, who are best known for their New York City Transit Authority Standards Manual project, took to crowdfunding giant Kickstarter once again to raise funds so that they can re-issue the 1975 NASA Graphics Standards Manual. 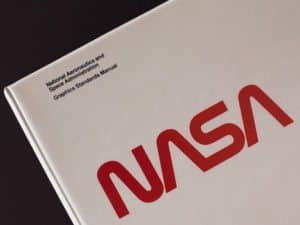 “[In 1972] Neil Armstrong has uttered his famous words. The Apollo era has come to an end. Public interest in space exploration wanes. After all, how do you top a man on the moon? Designers Richard Danne and Bruce Blackburn—of the New York firm Danne & Blackburn—walk into a room at NASA with a portfolio. Inside is a presentation that will change the face of NASA and their careers with it. 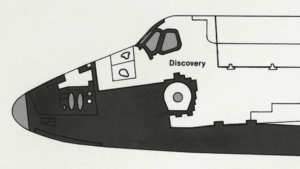 “Each page of the manual will be scanned and printed using CYMK + 5 Pantone spot colors. The manual contains three basic page formats: section dividers, standard pages, and gate folds. The standard sheets will be printed on the right side of each spread, with the section dividers including the front and back sides—this is consistent with the original ring-binder format.”

During the past 11 days, the campaign has soared past its initial goal of $158,000 and is now nearing $700,000. Unfortunately, NASA has decided to turn on the graphic artists by re-issuing the manual book themselves for free online download. Its description reads:

“A driving force and the use of innovative techniques and ideas have brought NASA the image of a get-it-done agency, and the record backs up the reputation. As we move ahead to an even more exciting era in aeronautical research and space exploration, we have added a new tool to enhance and symbolize the progressive path we have always followed. Not as suspenseful as a Command and Service Module splashdown nor as dramatic as a Mariner flyby, it is nonetheless of major importance because it is designed to achieve maximum communication of the agency’s program objectives, both internally and externally. We have adopted a new system of graphics-the visual communications system by which we are known to those who read our publications, see our vehicle markings and signboards and the logotype that unmistakably brands them as NASA’s.”

While the organization has not issued a statement about the impromptu release of the manual, Reed believes that the timing is a bit coincidental. He recently stated to Motherboard: 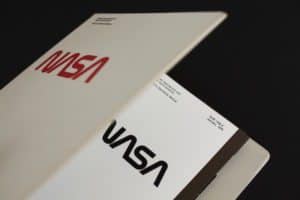 “We can’t say the move is directly responding to our project, but it’s safe to suspect they are related.”

He then added that while the download is nice, it’s no replacement for the book he and Smyth are working on:

“It’s great that they’re making the guidelines available to the public, we think they should be. That said, we don’t think that having an online PDF is the easiest way to engage with the information.”