Bavarian-based noDNA, Europe’s biggest online seller of robotics components for research and education,  launched a financing campaign on Companisto, offering venture loans bearing annual interest of 8%.  noDNA is the second venture loan offered on Companisto, following Sawade which has raised over 442,880€ of its 1M€ goal. 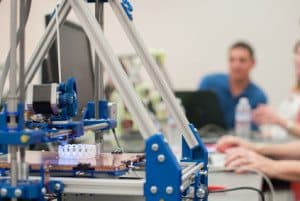 Founded in 2001, noDNA currently generates 600,000€ in annual revenues. Seeking to raise a minimum of 100,000€, noDNA has already exceeded 30,000€ with the help of over 42 investors within the first hours of launching. Identifying the demand for larger and more intelligent robotic arms for research and development projects within the market, the company plans to use funding to expand its services and customer base and also  to develop and produce robot kits and a new robotic arm for research.  The company currently sells both robotics and artificial intelligence components and complete systems to consumers,  universities, research institutions and the aerospace and film industries. noDNA’s product range includes servos, robot chassis, sensors and smaller components (e.g., cables) as well as 3D printers, generating70 % of its revenues through universities and major customers including Siemens, Deutsches Zentrum für Luft und Raumfahrt and Fraunhofer Institut.

“Robots do not just exist in movies; they have also become part of our everyday life. From 2010 through 2014 alone, revenues in this sector in Germany grew from €2.0 billion to €3.2 billion, which corresponds to a 60 % increase,” says Dotzauer.

The father of two daughters, Dotzauer hopes to engage young people in technology and robotics through noDNA:

“This is about using sophisticated technology to bring a structure to life and to enable it to work autonomously and intelligently. Such an exciting, fascinating, and challenging task also fosters logical thinking,” says Dotzauer.

The fascinating video pitch below alone serve to inspire others in the robotics import.  noDNA plans to produce its own robot kits for teenagers and novices in robotics. The company also plans to develop a total of ten kits, naming these kits after Companisto investors. For more detailed financial information regarding noDNA’s Companisto venture fund, please click here.  The campaign ends on 15 November 2015.  To date, 41,008 Companisto investors have invested over 22,453,000€ in capital during the platform’s 48 campaigns.