Following the launch of a fan running GoFundMe campaign to help Kanye West, sources close to reportedly “debt-stricken” musician revealed that he won’t be taking ANY of the funds from the initiative. 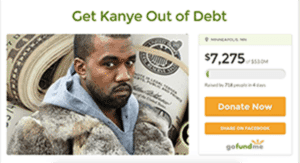 The organizer of the campaign, Jeremy Piatt, revealed to TMZ that he was contacted by the crowdfunding platform a few days ago and was told he cannot touch the fund from the campaign himself and that he would need to contact Kanye’s camp, who will only able to have access to the money. Piatt also mentioned that he wanted to take a little bit of money for himself (basically, he was planning to scam others).

“Recently, Kanye let us in on his personal struggle. He is 53 million dollars in debt and it doesn’t look like he’s going to get Mark Zuckerberg’s help that he desperately needs. We must open our hearts and wallets for Kanye today. Sure he is personally rich and  can buy furs and houses for his family, but without our help, the true genius of Kanye West can’t be realized. As Kanye West has told us time and time again he is the ‘greatest living artist and greatest artist of all time.’ Great artists need to be supported financially to achieve their full potential.”

Yeezy’s team noted that he has decided to not take the $7,000 that was given to the campaign and all funds will go back to the backers. The media outlet noted that the debt West is speaking of reflects how much money he has invested in his own companies related to fashion and music.