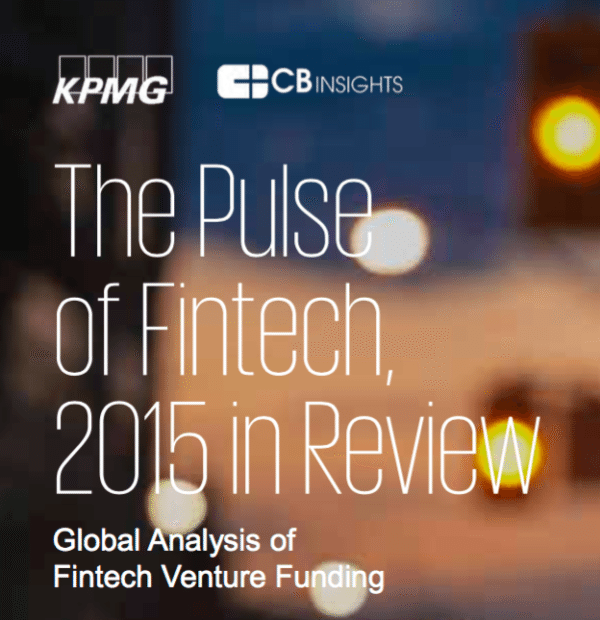 2015 was the year that financial technology entered the mainstream, claims the new report “Pulse of Fintech” from KPMG and CB Insights (see also the University of Cambridge Centre for Alternative Finance  seminal benchmarking surveys last year), which estimates that VC-backed fintech firms around the world secured $13.8 billion in funding as they began having a serious impact in every area of banking and insurance, according to a statement.

Last year fintech funding more than doubled from just $6.7 billion in 2014, noted the “Pulse of Fintech” report, which notes that a marked drop off in the number of deals in the fourth quarter was offset by the rise of so-called ‘mega-rounds’ – $50 million-plus deals, which jumped past 60. The report also highlights another trend – corporates are becoming increasingly active, with players from industries such as financial services, telecoms and technology participating in at least a quarter of all fintech deals for three quarters straight. Citigroup has been the most active bank investor over the last few years, followed by Goldman Sachs. 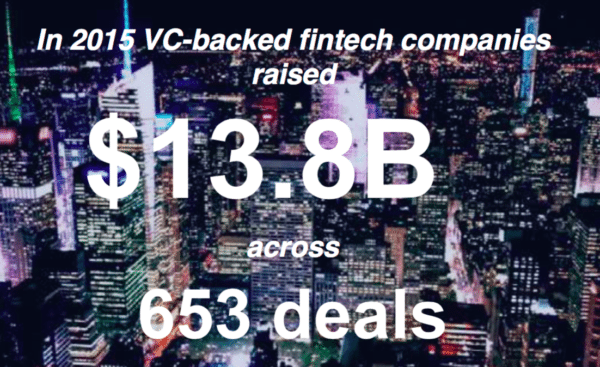 Geographically, despite the hype surrounding London, Europe lags behind North America and Asia. The US alone saw 351 deals worth $7.4 billion, a 72% rise on 2014 while in Asia funding quadrupled to $4.5 billion across 130 deals thanks to a spike in mega-rounds for firms like One97 and BankBazaar. Andreessen Horowitz has been the most active investor in North America fintech companies since 2011, followed by SV Angel, 500 Startups, and Google Ventures.
In contrast, despite having nearly as many deals as Asia, VC-backed fintech companies in Europe raised just $1.5 billion because of a lack of big rounds and less corporate participation than in Asia, where the Chinese giants such as Alibaba and Tencent are heavily involved in investing. Within Europe, the UK saw funding outpace that of Germany by nearly 400% thanks to investments in Funding Circle, WorldRemit and others.  No investors were more active in European fintech since 2011 than Index Ventures and Balderton Capital, which invested in Transferwise, Funding Circle and iZettle among others. Accel Partners rounded out the top three most active European fintech VCs. 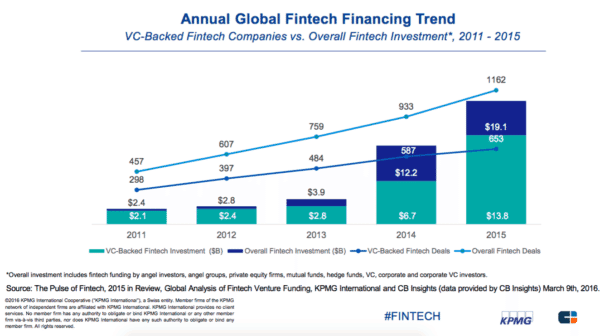 While payments and lending continue to dominate the fintech space – accounting for the vast majority of unicorns – the report picks out insurance as a rising area of interest with firms like Zenefits, Oscar and Gusto leading the charge. Meanwhile, the most hyped fintech area of the last year, blockchain technology, saw VC investment rise from $298 million in 2014 to $460 million in 2015. Although Citi, Santander, HSBC and others have formed partnerships with blockchain firms, the report cautions that major barriers still exist, including regulatory issues, which may mean that investors looking for short-term success are likely left disappointed. For the full comprehensive report and enlightening graphs, please click here.
Sponsored Links by DQ Promote