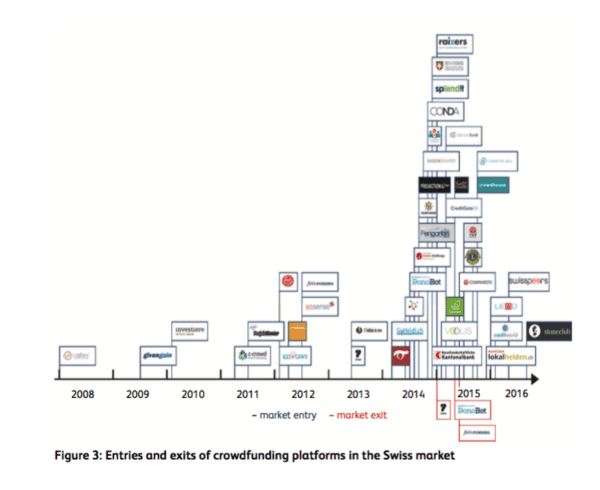 The Institute of Financial Services Zug IFZ, is out with its annual report on alternative finance. According to their numbers, the Swiss market jumped by 73% in 2015.  Much of the growth was driven by lending which experienced an increase of 127%. Currently there are about 40 different platforms operating in Switzerland today.  The authors of the report predict that 2016 should see a 2X increase for the Swiss market with growth coming mainly from SME lending and real estate crowdfunding.

Authored by Prof. Dr. Andreas Dietrich and Simon Amrein, they recognize that overall volumes remain modest – especially in contrast to the UK and the US. But they also see “fundamental change” in the internet finance sector;

“On the one hand, this [change] is the result of the arrival in the market or expansion of platforms focused on SME lending and real estate crowdfunding. Due to the high levels of funding required by these projects, we expect these platforms to boost the growth of crowdfunding in Switzerland. On the other hand, more established players such as 100days, Cashare, investiere and wemakeit are continuing their steady growth trajectories.”

Although awareness of the financing options is growing in Switzerland, the report states that only 2% to 2.5% of the population has participated in any type of crowdfunding project.

A point of note is the recommendation by the report that elected officials should incentivize and simplify online finance;

“…politicians should be considering generally simplifying the fiscal and regulatory landscape relating to crowdfunding. Tax breaks for risk capital investments (e.g. making capital contributions in start-ups tax-deductible and exempting such investment from wealth tax) would greatly benefit the investment climate in Switzerland.” 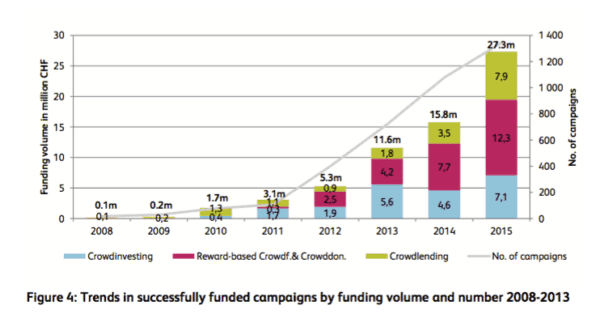 The research also believes the Swiss market is lagging behind in terms of development.

“…the market in Switzerland is much smaller. While large nondomestic platforms can profit from economies of scale and work on optimising their business models, large platforms in Switzerland continue to face challenges in terms of identifying a business model capable of covering their costs. The second is the regulatory landscape, which varies greatly across the markets..”

The total market volume for 2015 was stated at CHF 27.3 million. This is expected to grow to CHF 65 million in 2016.  While the lending sector is expect to boost growth, legislation that limits backers to just 20 “will continue to have a chilling effect in this area.”  Lack of appropriate regulation that aids sector growth is a missing component. Also the number of traditional financial firms interested in entering the market continues to grow.  A number of banks are expected to launch their own SME lending platforms.