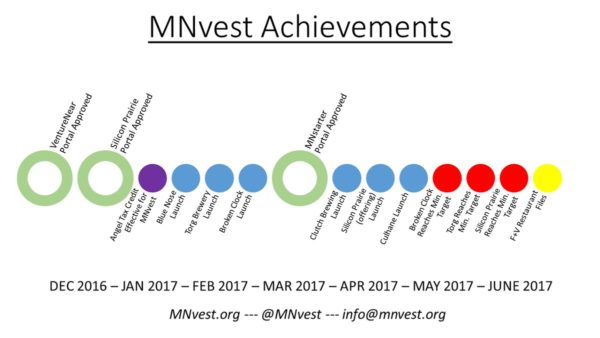 MNVest has tweeted out an interesting graphic that tracks sector progress for investment crowdfunding in the state of Minnesota.

For those not in the know, MNVest is the advocacy group, as  well as the name of the law, that helped to make Minnesota’s state crowdfunding exemption a reality. Without MNVest (the group that is) it is arguable little would have been accomplished.

In Minnesota, by meeting the requirements of the MNvest rules, companies may raise capital within Minnesota state borders after making a notice filing, paying a $300 fee, and waiting ten days before creating an offering. Both non-accredited and accredited investors may participate with non-accreds capped at $10,000 per offering. Accreds have no such limit. Issuers may raise up to $2 million with reviewed financial statements. If you keep it under $1 million you have to prepare financial statements internally thus avoiding an additional cost. All offerings must be sold through a registered portal and it is only available to Minnesota residents. Companies must generate 80% of gross revenue in the state to qualify.

According to MNvest, this is the status of crowdfunding in the state after 6 months:

In many ways the MNvest law is superior to Title III or Reg CF crowdfunding as enacted by the federal JOBS Act. Reg CF has a lower limit on the amount raised and lower investor caps. It is nice to see decent process in a state that recognizes the importance of supporting small business.

MNvest at six months: 3 portals, 7 campaigns, 3 successfully reaching their goal! Over $300,000 raised for MN Companies and more on the way! pic.twitter.com/TBEjrAiyZK