German coffee start-up Bonaverde secured its initial 750,000 funding goal less than 24 hours after launching its equity crowdfunding campaign on Seedrs. The initiative is now nearing 835,000 thanks to 60 investors. 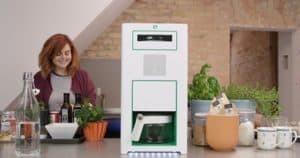 The company, which raised  $681,461 from 2,254 backers on Kickstarter in 2013 for its roast-grind-brew coffee machine, revealed more details about its growth and development:

“Bonaverde isn’t just disrupting one the world’s largest industries. We’re reinventing it. Our roast-grind-brew coffee machine transforms green beans into delicious coffee with the touch of the button. Coffee beans, currently a commodity, become a consumable, allowing us to disintermediate the world’s second-most traded commodity. Backed by respected Series A investors and with an infrastructure designed to scale, we’re positioning ourselves to lead the way to a better coffee industry, bringing fresher coffee to consumers and fairer trade to farmers.”

Bonaverde also received nearly €2 million during the Series A funding round, with investments from Jens Odewald, former CEO of Kaufhof/Metro Group and former board chair of Tchibo Holding until he joined Bonaverde’s board, and Michael Brehm a serial entrepreneur who has sold companies to Google and eBay. Speaking about the Seedrs success, Bonaverde founder and CEO, Hans Stier, stated;

“We’re certainly celebrating here. Crowdfunding has always been a part of our DNA as a company. It’s inspiring not only to meet our goal, but also to see that the grassroots, crowd-powered ethos of the Coffee Changer movement is still alive and well.”

Funding from the Seedrs campaign will go towards the company’s larger mission, building a connected direct-trade coffee ecosystem. The company added it is keeping the campaign open to further investment beyond their initial goal for a limited time.