With its equity crowdfunding campaign set to close on Crowdcube at the beginning of September, Enertor, an insole company that is endorsed and worn by Olympian Usain Bolt, has successfully secured more than 91% of its £750,000 funding target. 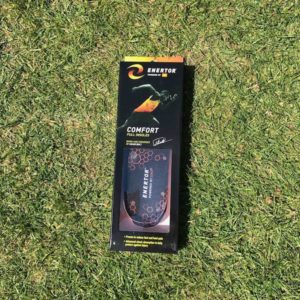 Enertor previously stated that its insole uses pioneering technology to reduce shock and impact injury and is not only used by Usain Bolt, but also the entire British Army. The company is aiming to transform the global foot orthotics (insole) market, moving it from its current medical focus and more elderly demographic, to a health and lifestyle proposition with a younger, more active profile and create global appeal. The key target market is people between 25 and 55 who are active and want to stay pain and injury free. Andy Croxson, co-founder of Enertor, explained:

“In the last 12 months we’ve doubled revenue to £2 million and launched our products in almost 500 stores, while building the brand with the help of Usain and also developing a grass roots following among active people in our target market. The funds we’re raising on Crowdcube will be used to buy stock and for the marketing associated with retail launches. Raising on Crowdcube means the many people who believe in our products can buy a stake in the company and invest in our growth.”

On Friday, the company announced it has formed a partnership with Runner’s World. In a recent update, Enertor revealed:

“Through its network of 14 international editions, Runner’s World is the best selling running magazine in the world. Because of its long history, global reach and market-leading position, Runner’s World is known as the ‘runner’s bible.’The partnership involves Runner’s World providing advertising and marketing support for Enertor in exchange for its new subscribers receiving a free pair of Enertor insoles. By partnering with Runner’s World we will be reaching our core audience helping to build our brand rapidly in a very efficient way. The offer is due to start on 28 September in the UK and we hope to expand the offer to all 14 international editions shortly thereafter.”

Funds from the Crowdcube campaign will be used to buy stock and for the marketing associated with the retail launches.The campaign is set to close on September 4th.