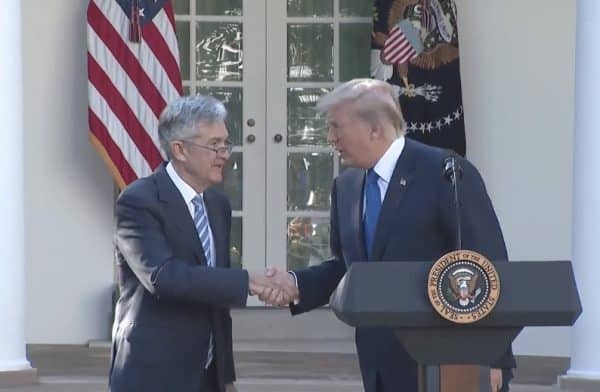 As widely predicted, President Donald Trump selected current Federal Reserve Governor Jerome “Jay” Powell as the incoming Chair of the US Central Bank. Powell will replace current Fed Chairman Janet Yellen this coming February, if approved by the US Senate.

Powell has been broadly lauded as a steady, dependable leader with an excellent grasp of the Fed, beltway politics, global markets and the realities of Wall Street.

Powell has served on the Federal Reserve Board of Governors since 2012. He was nominated for another term in June 2014 and was approved by the Senate in a 67-14 vote at that time. The 64 year old Powell is a DC native by birth. He received his BA from Princeton University and returned to DC for his JD which he received from Georgetown University in 1979. Powell practiced law for several years but also spent some time in the financial services world including a stint at The Carlyle Group.

As Crowdfund Insider wrote yesterday, Powell is open to disruptive financial innovations or Fintech but more cautious regarding Blockchain or Distribute Ledger Technology. He is also skeptical about the concept of a Central Bank created cryptocurrency, something several other central banks have considered.