London-based city exploration startup, Kompas, announced on Monday it has released a major product redesign while the company seeks £400,000 through its equity crowdfunding campaign on Seedrs. The private phase of the campaign launched last week, and the company has already reached 50% of their funding goal. 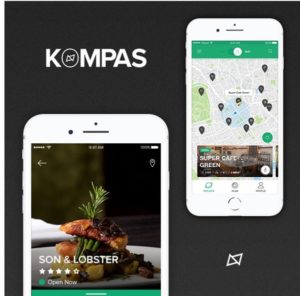 KOMPAS is described as a free app that provides users with personalized recommendations on where to go and what to do, with a focus on unique and independent locations. The content in the app is curated by city locals, and recommendations are selected to match a user’s particular needs and interests. The application is powered by machine intelligence, data, and machine learning algorithms.

Kompas was notably created in Munich when co-founders Tom Charman and Olivia Higgs were on their year abroad in university.  Olivia revealed:

“We struggled to go beyond the obvious, and discover the more authentic side of the city.”

Together with Chief Product Officer Kurt Henderson, they began creating a platform directing explorers to the offbeat, local places. Since its public launch earlier this year, the company has already acquired more than 19,000 users and is active in six cities across the UK and Germany. KOMPAS has previously raised a £165,000 pre-seed round of angel investment, won multiple awards for their innovation in travel and technology, and secured partnerships with corporates such as Visa Inc., London Midland, and Bookatable. Henderson added:

“In the newly released update, we’ve responded to user feedback by giving the app a whole new look and feel, as well as adding new features. We’re really proud of the product’s progress in the latest version, and we have even bigger plans. We love the influence that our community has on the development of the company, which is why we’ve decided to open up the opportunity for our supporters to join our mission with this crowdfunding campaign.”