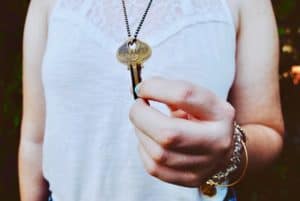 The SelfKey token Airdop has pushed pause as some users have expressed concern over the private key usage in the SelfKey wallet. SelfKey announced they were pausing the Airdrop in order to address this community concern.

SelfKey is a Blockchain based digital identity system that allows individuals and companies to own, control and manage their digital identity. The idea is to provide immediate access for proof of identity for Fintech, traditional finance, ICOs and more. SelfKey easily raised money in an ICO that closed earlier this month. It has partnered with Standard Chartered bank which has helped to raise the profile of the startup.

SelfKey said they had received multipe reports from users who have “experienced challenges” with the KYC file import process.

Additionally, there exists a community concern about their current wallet preview, which requires users to import their private key which corresponds to the address used in the KYC process, to unlock the SelfKey Wallet Preview.

In response to these concerns, Selfkey has initiated a new setup process for the SelfKey wallet which will allow users to generate a new key pair for receiving the Airdrop tokens. Much of the discussion on the SelfKey telegram account was supportive of the actions taken.

“We are committed to working in the best interests of our community. We are hearing your feedback. As part of the SelfKey Foundation’s commitment to transparency we will be launching fortnightly development updates to give the community greater insight into our work, and to encourage community participation in building a world class platform for sovereign identity management.”