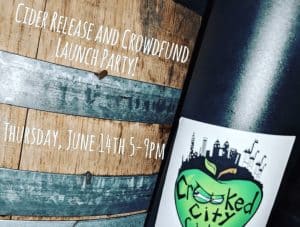 Oakland’s first cider since the prohibition,  has linked with Wefunder to raise a minimum of $100K; to date over 117 investors have poured in more than $52,900 into the campaign; the company has planned a special cider to celebrate the milestone. Every investor who invests prior to the campaign reaching the 50K minimum will qualify for the 2.5x rate.

During the Prohibition, Bushouse brothers John and Peter, “desperate for booze in their neck of the woods”,  created a moonshine production and distribution operation for all of Southern Michigan and Northern Indiana. Initially wildly, their luck eventually ended with a conviction and prison sentence. Eighty years later, Crooked City Cider’s founder Bushouse, the great niece of John and Peter, founded and slowly grew a new, legal version of their company, one step at a time, with much hands-on help from area friends. 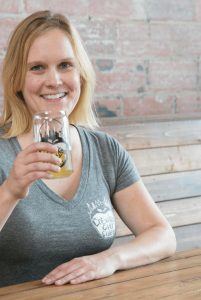 “Crooked City Cider is Oakland’s original cider; producing a variety of kick-ass dry craft ciders, currently available at select Oakland bars and restaurants and at our shared tasting room,” explained Crooked City Cider Boss and Founder Dana Bushouse. “We’re raising funds to support the buildout of our new taproom in Oakland’s Jack London neighborhood. We’ve secured a lease and are planning a late summer opening. The minimum cost of the buildout has already been secured through loans and company savings.”

According to the campaign, Crooked City Cider is profitable and the only Bay Area cidery producing natural, dry cider sans added juice and sugar as well as Oakland’s first cider tap house with over 25 taps of cider. Crooked City Cider anticipates producing over 5,000 gallons of cider this year. 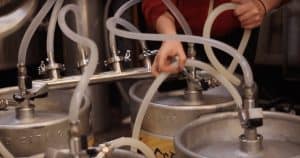 “The one thing we hear way too much of is “I don’t like cider, it’s way too sweet!” We know there are so many types of cider, and sweet is just one of them. Crooked City Cider was created to bring an actual dry cider to people; one they can drink like a beer!” according to the campaign. “We’ve been changing minds one cider at a time. The new tap house will present customers with 25+ taps of cider so they can experience all that cider is and can be. 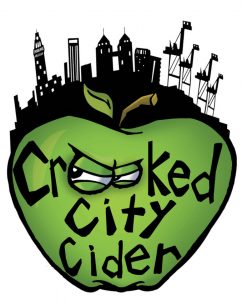 Since opening in 2014, Crooked City Cider has nabbed a lease for a full-fledged cider taproom in the Jack London neighborhood of Oakland with plans to open later this summer. On May 7 the cidery tweeted its groundbreaking. Currently profitable, funds from this raise will go toward sprucing up and fully outfitting the interior of the bar. The minimum cost of the buildout has already been secured through loans and company savings.

“The cider market is one of the fastest growing industries in the U.S. and thefastest growing adult beverage industry,” noted Crooked City Cider. “Cider sales are 10 times greater than they were 9 years ago, with cider sales making up 4% of the alcohol consumer market. We are seeing regional and local cideries driving this growth, making up 25% of the market.”