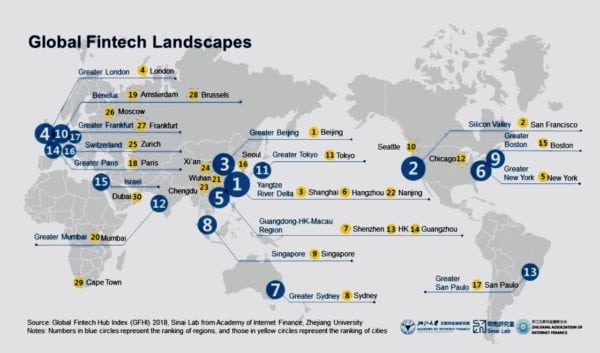 In recent years most Fintech Hub reports have pegged the UK, and more specifically London, at the top of the list when it comes to ranking Fintech centers of excellence. The UK has been widely lauded due to various characteristics but always included in these reports is the fact the Brits have a principles based regulatory approach that importantly embraces competition. Combine these qualities with a vibrant, global financial center, an entrepreneurial focused market economy, and things quickly add up. The concern that Brexit will dim the Fintech entrepreneurial spirit has compelled the UK government to accelerate its efforts in buttressing what is working and boosting what needs some help.

But earlier this month, coming out of China is a new report that puts the UK (or Greater London) in 4th place. The ranking, produced by the Sinai Lab from Academy of Internet Finance (AIF), Zhejiang University, in partnership with the Zhejiang Association of Internet Finance, has created the “Global Fintech Hub Index” (GFHI) that aims to portray the global development of Fintech industry and increase the understanding of global Fintech hubs at both the regional and city levels.

To quote the researchers;

“Taking a closer look at GFHI 2018, it becomes clear that the new world order of Fintech has gradually come into shape. Asia and America are leading the global Fintech race, while Europe seems to be falling behind. Meanwhile, countries / regions involved in the ‘Belt and Road’ initiative have gone through a phase of accelerated Fintech developments. Developing countries are leapfrogging, and the dream of inclusive finance is closer to reality.”

The report breaks down the rankings as follows:

The authors have thus ranked the top 17 regions and top 30 cities in the GFHI.

The “tier 1 regions” in terms of Fintech development, include the Yangtze River Delta in China, Silicon Valley in the USA, Greater Beijing in China, Greater London in the UK, Guangdong-HK-Macau Region in China and Greater New York in the USA. The report states that “three Chinese regions position themselves as tier 1 regions and China seems to be on its way to transcend other countries in financial development by developing its Fintech industry.”

The Fintech Ecosystem Index has Greater London as number one. The authors point to the pioneering Fintech sandbox approach that “has been an important breakthrough on Fintech regulatory innovation which renders experience for long-term global Fintech development and can shed light on regulatory conducts in other markets globally.”

In looking just at the city rankings, the top five urban centers are;

It is interesting to note that Sydney, Australia is ranked in 8th place and Singapore is pegged in 9th.

So what is the takeaway? 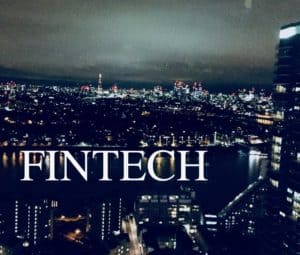 At least according to this report, China is dominating Fintech innovation. If you look at the big tech – Fintechs this report makes sense. The Alibabas and Tencents of the world have created dominating ecosystems that provide a vast array of financial services, ecommerce and much more for both consumers and businesses. Some Fintech industry followers believe this is the path forward for the future of finance.

The Alibabas and Tencents of the world have created dominating ecosystems that provide a vast array of financial services, e-commerce and much more for both consumers and businesses #Fintech Click to Tweet

When looking only at the Fintech Ecosystem Index, London holds the top spot due to a “well-functioned economy, proliferation of startups and favorable government policies.”

As with any report like this, it depends on how you add up the chosen variables and no characteristic is ever static. Being ranked anywhere on the list may be deemed an accomplishment of sorts. Soon enough, there will be another Fintech ranking report.

See below the GFHI Regional Rankings 2018 (not the City specific ranking).