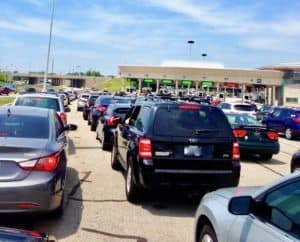 Users of a little-known Chinese cryptocurrency exchange called FCoin managed to clog the Ethereum network last week when they gamed a voting process on the exchange.

FCoin ran a promotional scheme last week whereby they told users to vote for cryptocoins they wanted listed on FCoin by depositing those coins on the exchange. At the end of a voting period, the coin with the most deposits, FCoin promised, would be listed on the exchange.

Exchange listings are very crucial to cryptocurrency projects and investors because prices generally rise on news of listings and early holders can dump coins profitable during resulting hype-fueled run ups.

There are stories of prominent cryptocurrency exchanges charging projects millions to list coins.

Naturally (this is the Internet, after all), FCoin users quickly realized they could game the coin vote by sending in multiple votes from various accounts set up by the same individual user.

Scaling is an issue for many blockchains currently as the generally slow process of confirming transactions simultaneously across hundreds or thousands of participating nodes means these systems struggle to compete with legacy financial networks like Visa, which claims to process 24,000 transactions per second.