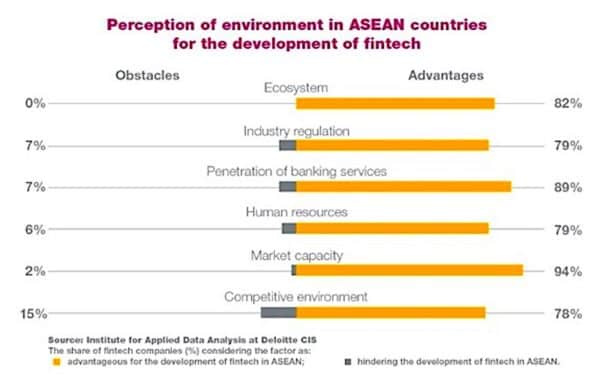 Online lending platform Robocash says that the ASEAN market is the best region for Fintech development during the next year. A report completed in partnership with Deloitte by Robocash states that Fintech investments in Southeast Asia will increase by more than 20-30% in 2018 compared to the previous year.

The catalyst for this growth is the “insufficient financial inclusion” that will boost the industry and bring in the advanced expertise and technologies from the developed markets.

Robocash says that the average level of the current Fintech development in ASEAN (52) is lower than in North America (190) and Europe (59). Even while Fintech is less developed in ASEAN countries, in 2017 the region gained US$ 5.7 billion in investment.

Robocash states that more than 60 private Fintech firms shared their views on the factors facilitating or hindering the sector development.

The survey indicated that the market capacity is the main driving force for the industry globally.

Most respondents were positive about opportunities in North America (96%), ASEAN (94%), and Europe (92%) and considered Latin America to fall behind (81%).

Simultaneously, 89% of surveyed companies reported that the low penetration of banking services brings ASEAN countries to the forefront in the development of Fintech. This is less relevant for Europe (84%), North America (82%), and Latin America (61%).

The most promising sector is said to be online lending and access to credit.

Robocash points to the Cambridge Centre for Alternative Finance report that said the potential of the market APAC  and the P2P/marketplace consumer lending in Asia Pacific (excluding China) at US$ 824.6m in 2017.