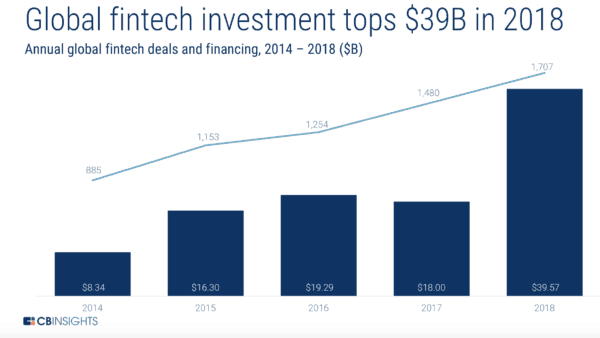 Fintech deals backed by VCs hit a record during 2018. According to a report by CB Insight, Fintech rocketed 15% year over year raising $39.57 billion for 1,707 different deals globally. This number was helped by the good number of “mega-deals” or funding rounds in excess of $100 million which, in aggregate, captured $24.88 billion of the total.

Fintech is not hampered by borders as innovation in financial services is a global phenomenon. The biggest jurisdictions for Fintech continue to be China, the US, and the UK generating 39% of the total.

The number of investors stood at 2,745 – a number that was aided by corporate participation.

Of note, is the fact that private deals are booming but initial public offerings have tanked. This is largely due to promising young firms staying private as long as possible due to the excessive cost of becoming a reporting company – especially in the US. 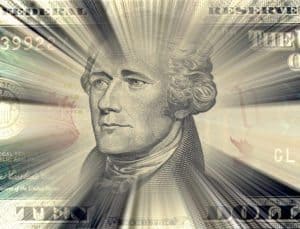 The herd of Fintech unicorns continues to expand. In Q4 2018. four more unicorns were minted including digital bank Monza, Plaid, Brex, Toss, and DevotedHealth. There are now 39 Fintech unicorns with a combined valuation of $147.37 billion.

The report says the US remains the top spot for the number deals with 659 different investments valued at $11.89 billion – a new high. But the US still pales in comparison to the Asian Fintech powerhouse (IE China).

Asia claimed the biggest amount at $22.65 bill for 516 deals. China’s Ant Finance was very active accounting for 35% of the entire Fintech total allocating $14 billion to Fintech.

The number of deals in Europe slowed closing 367 raising $3.56 billion – another record.

As one may assume, the number of early-stage deals dipped as investors focused their firepower on assumed winners.

Noted trends include the “battle for deposits” – meaning digital only challenger banks. While traditional banks are fighting back, they still don’t quite get it… and digital banks are moving quickly to take advantage of the imbalance.

There is also the lingering question of regulation. While regulators are watching the shift from analog to digital with great scrutiny, many regulators are recognizing the benefits to consumers and businesses and partnering with Fintechs or lowering the barriers to entry.

This is an excellent report. You can download it here. 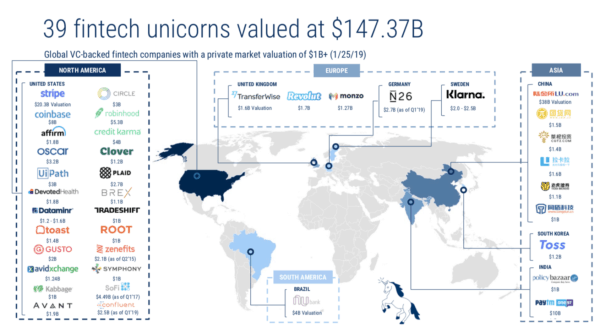