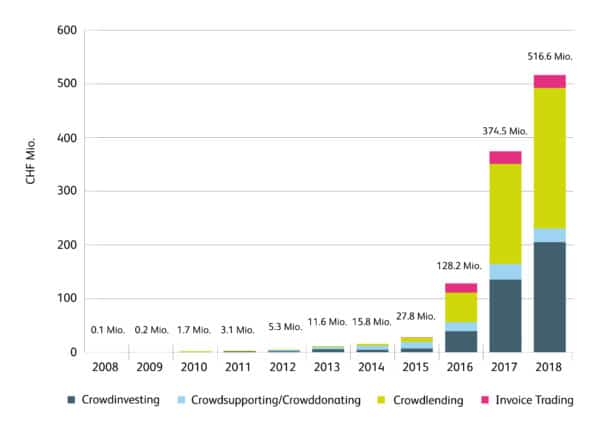 The Institute for Financial Services Zug IFZ at the Lucerne University of Applied Sciences and Arts has published their annual crowdfunding report and it appears that Switzerland is developing a robust online capital formation market. The author of the study is Prof. Dr. Andreas Dietrich.

According to the “Crowdfunding Monitor,” Swiss crowdfunding volume has topped CHF 500 million for the first time raising CHF 516.6 million (about USD $515 million).

Since the industry launched eleven years ago, CHF 1.085 billion has been raised through crowdfunding.

In comparison to the year-earlier Monitor, the total came in at CHF 374.5 million an increase of 38%. The authors declare that Switzerland has thus developed into one of the largest crowdfunding markets in continental Europe. There are currently 43 different platforms. A solid number for a country the size of Switzerland.

While growth remains strong, 2017 was the best year on record showing a 192% increase over the year prior.

The biggest growth drivers in 2018 were the financing of SMEs through marketplace lending and investments in real estate through equity-based crowdfunding.

For the first time, Switzerland witnessed a decline in the number of crowdfunding platforms. Fengarion, bee Invested, moboo and letshelp.ch withdrew from the market in 2018.

Only two platforms entered the market in 2018, Crowdpark and SIG Impact.

The Monitor divides the market as follows:

As one would expect, debt based is the largest segment crowdfunding.

Some observers now categorize “rewards” simply as e-commerce due to the dominance of pre-sales for the purchase of a product and thus is not true crowdfunding.

If you combine Invoice trading and marketplace lending – the debt based portion takes on even more prominence.

Prof. Dr. Dietrich notes that in the marketplace lending sector many loans are no longer financed by a large number of investors but by a single professional investor.

“This reduces the importance of private individuals. We can also see similar developments in the financing of start-ups in equity-based crowdfunding,” says Dietrich.

He states that the importance of professional investors will continue to grow in the future and can help the market as a whole to achieve further growth.

A section of the Monitor the report addresses the Swiss initial coin offering (ICO) or tokenization market. The Monitor states:

The ICO volume in Switzerland in 2018 was approximately CHF 800-900 million (previous year CHF 837 million). The largest ICOs in Switzerland were carried out by Envion (USD 100 million), Nexo (USD 52.2 million) and SwissBorg (USD 50 million). 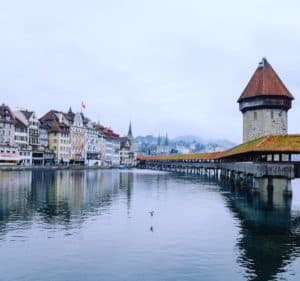 The Crowdfunding Monitor does not incorporate ICOs/STOs in this publication but the emerging importance of digital assets is hard to ignore.

Looking at crowdfunding volumes per capita in an international comparison, Switzerland is one of the more relevant markets worldwide. Even in absolute numbers, the Swiss market – despite its comparatively small domestic market – has reached a considerable volume.

In continental Europe, however, Switzerland shows comparatively high volumes. The crowdfunding volume per inhabitant in Switzerland, as measured in the Monitor, is CHF 61. In 2017 the number stood at CHF 45. In relative terms, the Monitor reports that the Swiss market much larger than that of its neighboring countries. Switzerland is 4th globally, behind only the UK, US, and Estonia. On a per capita basis, Switzerland is far ahead of other European countries like Germany and France.

For the year 2019, the study authors assume that the total volume will see continued growth in the double-digit percentage range. A total volume between CHF 700 and 900 million is predicted.

As Crowdfund Insider has come to expect, Prof. Dr. Dietrich produces an excellent report that is a must-read for industry participants. Our only wish is that going forward digital assets, of great prominence in Switzerland, will be included in future reports.