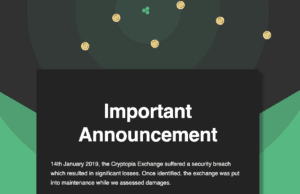 A court in the Southern District of New York has granted provisional relief to defunct New Zealand cryptocurrency exchange Cryptopia as it attempts to maintain access to customers’ trading balance data managed by an Arizona firm claiming the exchange owes it $2 million USD.

Cryptopia collapsed this Spring after hackers executed a prolonged robbery against the company in February.

During that attack, unknown hackers reportedly spent days draining $16 million USD in cryptocurrencies from Cryptopia “hot wallets” (accounts accessible by Internet) as administrators looked on powerless to stop the hack.

Last week, Cryptopia went into liquidation, and Grant Thornton New Zealand has been contracted to administer the dissolution.

The order in New Yole was granted as part of Grant Thornton’s successful bid to secure  bankruptcy protection in the US after the presiding judge determined that, “Unless this Order issues, it has been clearly shown that the Debtor (Cryptopia) will suffer immediate and irreparable injury, loss or damage for which there is no adequate remedy at law.”

According to an update from Grant Thornton regarding the order for provisional relief:

Access to accurate user data is important if Cryptopia ever compensates users who lost cryptocurrencies in the hack and bankruptcy.

Grant Thornton states that is expects, “… the process of recovering data and determining how to make distributions to account holders will take some months at least.”

A number of people claiming to be affected Cryptopia users have posted distressed messages on Twitter in the wake of the liquidation news:

Other “Crypto Twitter” commentators have criticized Cryptopia for not having its own back ups of user account data: