The Hearing will most certainly address the emergence of Fintechs, specifically online lenders, that partner with chartered banks to originate loans to both consumers and businesses. 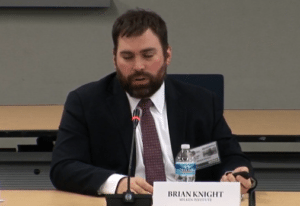 This single-panel hearing will involve the following witnesses:

The Hearing memo states that “bank partnerships with non-banks are a rising occurrence in lending.”

To quote the Committee:

“When a loan is originated under such partnership, the bank originates the loan but under the guidelines of the non-bank lender. This loan is then quickly sold to the non-bank lender. The consumer receives the loan from the bank. Under current federal law, national banks and Federal Deposit Insurance Corporation (FDIC)-insured state banks may maintain the maximum interest rates of the states where they are headquartered, meaning they can charge those rates even when lending to borrowers in other states with stricter usury laws. Legal questions have been discussed over the years as to whether the above applies to non-banks that purchase loans from banks in these and other types of partnerships. Some have argued that banks can effectively assign the interest rate exportation power when they sell loans to non-banks, which otherwise do not have such a power as a non-bank. They argue this is permitted through a purported “valid when made” doctrine, which stipulates that a loan that is compliant with the law’s usury caps when originated cannot become noncompliant at a later time.”

The Committee worries about the “dangers of rent-a-bank” partnerships.

While a portion of the concern revolves around Payday loan like operations, it is clear that many online lenders provide greater access to capital, and at times, competitive rates. Today, many banks do not want to provide loans to small businesses as the cost is simply too high. For some online lenders, like LendingClub, they provide a viable alternative to get out of high cost credit card debt and thus provide a valuable service to consumers.

Online lending, whether via a chartered bank or Fintech, is pretty much the future. If Fintechs can provide a better, cheaper service, hopefully Congress has the capacity to recognize the benefit.

The Hearing will be live-streamed on the Committee website.