The codebase of the AVA blockchain, a platform that aims to democratize capital markets while bridging or connecting all distributed ledger technology (DLT) platforms together into a single interoperable ecosystem, has been officially released to the global community.

“As the ‘AWS of finance,’ AVA aims to provide an advanced infrastructure for building decentralized finance (DeFi) applications, enabling anyone to launch their own blockchains with custom validators and issue assets under any required features and rulesets, including custom virtual machines and programmable legal compliance.”

The AVA network allows both public (permissionless) and private (permissioned) DLT-based platforms to interoperate in a scalable manner, which is somewhat similar to how the Internet was developed.

The AVA network is also the first system to use the Avalanche consensus protocol, which was introduced back in 2018 by the pseudonymous team, known as “Team Rocket.”

The developers of AVA claim that the blockchain-powered network can support “millions of nodes and securely handle thousands of transactions per second.”

AVA’s infrastructure is flexible and secure. It allows anyone to build their own blockchain network or subnetwork. Developers can create custom permissioned or permissionless subnetworks using various scripting languages, virtual machines, validators, and rule sets – “all while being plugged into one unified, interoperable framework.”

The AVA software toolkit consists of a digital wallet, faucet, and libraries for developing applications.

“Instead of one network with thousands of tokens, the AVA ecosystem is one platform with thousands of subnetworks and tokens on each subnetwork. We are truly excited to share the code with the broader blockchain community, and welcome any and all input.” 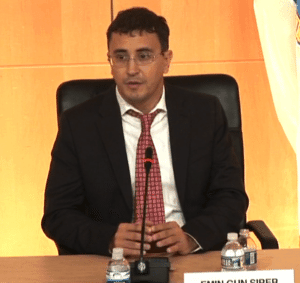 “The release of the AVA codebase concludes the first phase of research and development for AVA, while also demonstrating the commitment to its open-source and decentralized community. Seeing the performance and security improvements made possible by the Avalanche protocol, other major cryptocurrencies, such as BCH, have announced plans to incorporate Avalanche or variants of it.”

“The AVA platform has coupled this protocol with a revolutionary network model that enables the system to span permissioned and permissionless networks, making AVA the first and only true self-serve platform for new blockchains and digital assets.”

AVA Labs has established the Developer Accelerator Program (the AVA DAP) to encourage and support engagement from the initiative’s community of creators, developers, bug hunters, and security experts.

The program reportedly offers participants the chance to earn as much as $50,000 per contribution and encourages meaningful feedback from AVA community members.

“As we get closer to our mainnet launch later this year, we invite anyone to identify and address any possible bugs or enhancement opportunities within the code.”