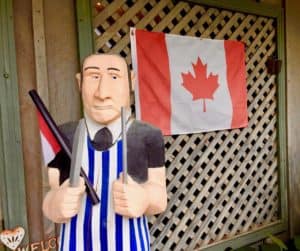 Ontario, Canada’s Tahinis Restaurants, which claims to be the world’s best Middle Eastern restaurant, revealed that it has converted its entire cash reserves into Bitcoin (BTC), the flagship cryptocurrency.

The company explained that it experienced significant challenges during the historic market crash in March 2020, following the COVID-19 outbreak. They noted that it was quite tough on them and people, in general, had been scared to go out to eat.

The restaurant owners revealed that they were forced to part ways with their partners and employees. They also claim that they were working around the clock to maintain their operations.

They noted that they were able to keep their business going, with a lot of hard work and dedication, however, they were faced with “one big problem.”

“The government assistance programs in Canada made it very hard for us to bring back our partners (employees) as they were making more money staying at home and not working. All of a sudden we went from an economic crisis to everyone having a lot of money Including us.”

“Our Cash reserves swelled and business was booming again. But it was apparent to us that cash didn’t have the same appeal. That eventually with all the excess cash circulating the economy that cash would be worth less.”

The restaurant owner claims he’s been an active investor and that he discovered Bitcoin (BTC) and thought about investing in the digital asset on several occasions. However, he never gave it much attention because of people like billionaire Warren Buffett who had referred to cryptocurrencies as “rat poison” and has said that he’s certain they will have a bad ending.

But with the passage of time, he realized that Bitcoin would make a worthwhile investment, because he had been reading and researching about how it works.

“I view Bitcoin as a true free savings technology that stores wealth across time and space. And it [became] apparent to me that there is a game of musical chairs being played right now and the music will stop and some people will get left out…as a company, [we] decided to store all of our excess cash reserves into Bitcoin as it offers a much better alternative to saving cash. We will continue to do that over the coming years and maybe forever if we don’t have a need for the fiat.”

It seems like more people are becoming aware of Bitcoin (BTC) and other cryptocurrencies, according to a recent survey from US based Bitcoin ATM provider, CoinFlip – which reveals that one in five Americans or 20% of them have purchased digital currencies.

More than 1,000 Americans were asked various questions about cryptos.

An increasing number of consumers said they now prefer to use crypto to pay for goods and services.  About 14.5% of US residents, responding to the survey, said they knew or were aware of three or more cryptocurrencies other than Bitcoin

Around 44% said they bought cryptos from an exchange, meanwhile, Bitcoin ATMs or in-person transactions were the “second-most-popular” options at about 28%, the survey revealed.

The CEO at crypto firm BitGo recently recommended allocating 3% of portfolios to Bitcoin, after a Nasdaq listed firm acquired $250 Million in BTC as its “primary reserve asset.”

While Bitcoin might be emerging as a legitimate or widely-used asset, it’s worth noting that cryptocurrencies remain highly volatile and there are many scams being carried out in this space. Historical data confirms that diversifying one’s assets instead of completely allocating to one type of asset is almost always a better idea. In other words, don’t keep all your eggs in one basket.