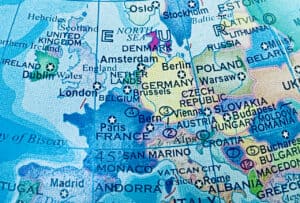 European VC firm Sapphire Ventures will significantly expand its European investment activities over the coming year, the company said this week. As part of this expansion, which follows the opening of the firm’s first European office last year, Sapphire promoted Annalise Dragic, currently a principal, will be promoted to partner, making her one of Europe’s youngest female VC partners.

Sapphire Ventures partner Kevin Diestel has relocated from Silicon Valley to join the European team and is now based in the London office. As a result, nearly a third of the firm’s enterprise venture-specialized partners are now based out of London. The team will continue to ramp up investment activity into the European and Israeli ecosystem during 2022.

This commitment to European expansion follows Sapphire’s announcement earlier this month of $2 billion in new capital commitments for investments in late-stage technology companies across the US, Europe, and Israel. This is the firm’s largest fundraise to date and comes across Sapphire Ventures Fund VI and Sapphire Ventures Opportunity Fund III. This fundraise brings the firm’s assets under management to $8.8 billion.

Sapphire said its European team is a key pillar in Sapphire’s overall ambition to be the preferred partner to visionary teams and funds building companies of consequence. The announcement of these new funds significantly increases the capital available to back ambitious founders across the region.

Dragic becomes Sapphire’s newest and first female partner focused on Europe and one of the youngest female VC partners in the ecosystem. Dragic, 29, joined Sapphire as a principal in 2020. She has been involved in Sapphire’s investments in Adverity, Contentful, Currencycloud, GitGuardian, Matillion, Unmind, and Yapily, and worked on the firm’s investments in Cazoo and Wandera.

“I’m honored to become partner at Sapphire Ventures,” Dragic said. “There has never been a more exciting time to be a venture investor in Europe. I’m looking forward to deepening Sapphire’s presence across the continent, building out our team, and partnering with more ambitious mission-driven founders.”

“I’m excited to be part of Sapphire’s European expansion and I’m looking forward to partnering with more companies of consequence on this side of the Atlantic,” Diestel added. “Since our founding in 2011, we have had a presence in Europe, but we are now seriously underscoring this commitment to the market through our London office and by rapidly expanding our team on the ground.”

Vice president Thomas Moon has also relocated to London. He will support Sapphire’s activities by partnering with early-stage venture capital managers in Europe and Israel. Abhishek Lahoti has also joined the team to lead the firm’s international expansion Center of Excellence and spearhead the European arm of the Portfolio Growth team, with a specialization in advising companies on operating in the region.

In 2021, the firm backed a number of companies across Europe and Israel. This came against the backdrop of a milestone year for Sapphire’s European portfolio, with four public debuts –  Monday.com, Kaltura, Wise, and Cazoo – as well as the acquisition of Wandera by JAMF, the acquisition of Qubit by Coveo, and the announcement of Visa signing a definitive agreement to acquire Currencycloud.

Duriing 2021, Sapphire Ventures has invested in a number of new investments in Europe, including London-based Unmind, Helsinki-based Tesseract, London-based Yapily, and Paris-based GitGuardian.

Looking ahead to 2022, the Sapphire team aims to step up the pace of investment in the European ecosystem. Sapphire’s London-based team is led by Sapphire founding partner, Andreas Weiskam. After helping found Sapphire Ventures in the firm’s Palo Alto headquarters, Weiskam moved to Europe in 2012 and has driven the firm’s European and Israeli investment activities to-date.

“The supply of ambitious entrepreneurs and great ideas is not limited to any geography,” Weiskam said. “The barriers to build global companies of consequence are falling and there are now over 60 cities with unicorn companies in Europe. These are exciting times, and I could not be more thrilled about the excellent additions to our Sapphire team to seize the increasing opportunities in the European ecosystem”.

The team will continue to focus on investing in Series B through to IPO stage, high-growth tech companies, primarily across business applications, Fintech, and infrastructure software, as well as continuing to support early-stage and emerging fund managers through its Sapphire Partners arm.