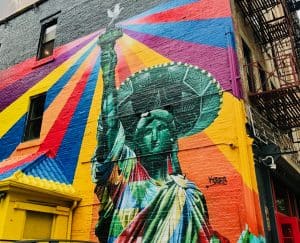 The Metaverse and the GameFi world have grown tremendously, with nearly every blockchain  ecosystem in the crypto space getting more actively involved.

Polygon (POLY) ecosystem’s capabilities of building and connecting different blockchains and dApps is being supported by the launch of Polygon Studios, which is their branch focusing on blockchain gaming and NFTs. In order to help them with their Metaverse journey, Polygon will work with the Liberty Gaming Guild.

As explained in the announcement, Polygon is not just a blockchain, but also a blockchain builder and connector. It enables the creation and connection of EVM (Ethereum Virtual Machine) compatible chains, while “simultaneously speeding up transactions and reducing fees.”

Given Polygon’s position in the world of crypto, and their own standing as one of the fastest growing gaming guilds in the play-to-earn space, they claim to be confident that their latest collaboration marks the beginning of a promising adventure.

As covered, Polygon is one of many platforms for Ethereum (ETH) scaling and infrastructure development. The team claims they are well-structured, offer user-friendly services, with Polygon SDK at its core; as well as a framework for building multiple types of apps.

Polygon’s developers explained that they turn Ethereum into a complete multi-chain system . This system is “not too dissimilar to others including Polkadot, Cosmos, Avalanche and more, whilst offering the advantages of Ethereum’s security, ecosystem and openness.”

Polygon Studios is a branch that primarily focuses on blockchain gaming and NFTs, “showing continued efforts in connecting the Web2 and Web3 worlds, whilst simultaneously facilitating NFT development on its network.”

Polygon further claims that their ecosystem now includes more than 100,000 native blockchain gamers. The launch of Polygon Studios will aim to enhance this already solid position.

As noted in a release, Liberty Gaming Guild is “a barrier breaking project and community in the world of ‘play to earn’ gaming.” The guild aim to “become the ‘gateway’ for gamers to gain access to otherwise expensive & inaccessible NFTs within blockchain gaming, as well as providing an ecosystem for them to learn and thrive within the new gaming era.”

Liberty explains that they plan to “lower the entry barrier to participate in blockchain based games such as Axie Infinity, by lending in-game NFTs to [their] dedicated community gamers (‘scholars’).”

As noted in the update, this “increases their chances of success within the game by utilizing superior characters, tools, armoury and much more, to create greater earning potential for the scholar.”

As explained by its creators, Liberty Gaming Guild was formed in November 2021. The project came about via the rise of the space when Synergia Capital made an investment into this sector “through the use of a gaming guild- which is the most discussed current format.”

Liberty is planning to become “the gateway for gamers to get easier access to NFTs that would normally be too expensive, or impossible to access.” The project seeks to “teach and mentor these gamers, as well as provide them with a way to make earnings from playing games.”

As per the investors’ aspect – Liberty is also “a gateway for those who want to invest in blockchain gaming.” The team currently has the infrastructure set up for support “with one NFT game which is Axie Infinity.” The team also has plans to “expand this to other games as the project continues to grow.”

As mentioned in the announcement, Liberty Gaming Guild is “not just here to make people money playing games, they’re here to make a difference in people’s lives in the long term.”

The project also provides education, training and support in a number of areas, “to assist in creating stability for their gamers in both their play-to-earn careers and their lives.”

Some of the games they invest in are:  Axie Infinity, The Sandbox, League of Kingdoms, Star Atlas, Guild of Guardians, and Illuvium.