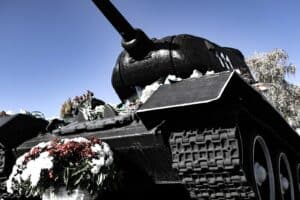 Hong Fang, CEO at digital asset firm Okcoin, notes that it has been a really “tough week” for a lot of us, “especially those who are in Ukraine (and Russia), or have families affected by this invasion and horrible unrest.”

Fang writes in a blog post that this war is “weighing heavily” on her. The Okcoin Chief Executive added that she wants to share a few messages with you “in the spirit of transparency so you understand where [their] organization stands.”

Fang added that she also wants to let you know that “while this conflict and uncertainty will continue to evolve, [she is] lifted by the strength and passion of our team, as well as the importance of our mission.”

“We’re in the middle of unprecedented sanctions being announced by governments around the world. To be clear, we will follow all mandatory sanctions when they come. But we firmly believe that every individual should have free access to their financial wealth, and the freedom of not being controlled or affected by who governs them. We’ll uphold our mission of making crypto accessible to everyone. Therefore, we have no plans to freeze accounts beyond mandatory sanctions, REGARDLESS of where our customers are.”

“I want to take this opportunity to reiterate: We are not in the business of building an old system. Part of what makes this crisis unique is that it’s occurring while billions of people have access to bitcoin. And while there’s a lot more than money at play, we’re at the center of unprecedented changes in how people use and store wealth when governments or dictators act to control them. Of course, we all wish this war would end quickly or would have never been started in the first place, but it does point me back to the importance of the work we’re doing — the importance of crypto for all.

She emphasized that crypto is “for all.” She also mentioned that a crisis like this “shows how bitcoin and crypto is so much more than charts.” There are real people who “depend on the alternative system we are building because they’ve had everything else taken from them.” Know that you and your work “are part of something much bigger than any of us.”

“We have no control over our partners’ actions: banks, payment systems, and organizations that we depend on may act differently, which in turn means our customers will not have the experience they expect as before this chain of events happened. In particular, for customers in Belarus and Russia right now, there may be failed transactions due to sanctions affecting financial institutions in those countries.”

She further noted that they cannot “foresee what will happen, but we promise to be transparent with you and with our customers who are affected.” She added that Okcoin will “fight in whatever way [they] can for everyone’s freedom to receive and use crypto on his/her own terms (as long as it’s legal).”

Fang added that she also believes that “it’s equally impactful for us to focus on building the alternative system and make it DAMN good.”

Fang pointed out that the history of fiat is “a history of war.” She added that when governments can print money freely, capital market distortion is “the least ugly implication of such a system. Average citizens don’t have control over their own wealth (either value or access).” And ultimately, we find ourselves “in violent situations like this that are imposed by those in power who abuse the system for their own desires and beliefs.”

She added that for average citizens themselves, the strongest support they “can give to each other (and to our future generation) is to focus on building the right thing.”

She also noted that they “will fight OUR war by building on Bitcoin and around bitcoin, by building a more decentralized and free world where no government or organization can control how we live and care for our family.”

Okcoin confirmed that for clients in Belarus and Russia, you may “experience failed transactions, especially if you’re banking with an ex-SWIFT entity.”