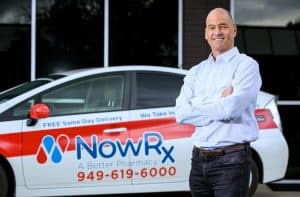 Towards the end of 2021, NowRX announced a Series C funding round on the securities crowdfunding platform SeedInvest. The Reg A+ offering was seeking preferred equity at a pre-money valuation of $275 million.

Today, the offering is still live and over 5100 individual investors have now invested $16.145 million. The minimum goal was set at $2.5 million so the offering is far above that. The company hopes to raise up to $73.5 million – near the Reg A+ funding cap.

NowRX is the Amazon of healthcare providing same-day pharmacy delivery as well as a new “telehealth” service.

On the company’s offering page, NowRx reports 8 licensed facilities across Northern California, Southern California, and Arizona, having delivered over 365,000+ prescriptions to 35,000+ customers. The plan is to take the model nationwide.

“We are excited to announce that we now have a total of 12 NowRx pharmacies, with 8 fully operational locations. We expect to have the four facilities announced this year operational in the upcoming months, which will help us continue to grow revenue and achieve the milestones we have set as a company.”

Relatively new services NowRx Telehealth set a record for new prescriptions written and delivered accounting for over 3% of the company’s record January revenue of $2.21 million.