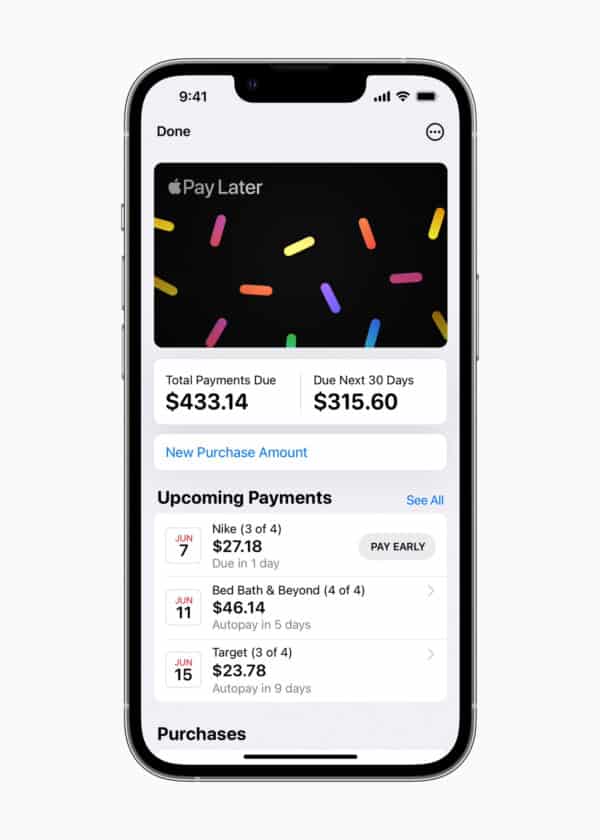 Apple (NASDAQ:AAPL), the world’s largest company by market cap and ubiquitous tech firm, announced a buy now – pay later product today alongside a solid portfolio of other updates. During the annual WWDC keynote, Apple executives revealed Apple Pay Later, a new feature of the Apple Wallet that allows users the ability to choose to pay for purchases over four equal payments, over 6 weeks, without any fees or additional interest rate payments. The move places Apple in competition with other buy now, pay later providers such as Affirm (NASDAQ:AFRM). Affirm’s service is somewhat different as it offers 4 interest-free payments every two weeks or the option to receive installment credit for certain purchases.

Users may apply for Apple Pay Later when they are checking out with Apple Pay, or in Apple Wallet. With Apple Pay Order Tracking, users may receive detailed receipts and order tracking information in Apple Wallet for these purchases with participating merchants.

Also reviewed during the keynote was Apple’s Tap to Pay which has already been announced with several partners and more to follow. This feature turns an iPhone into a payments terminal – a huge convenience for small businesses.

Apple has slowly moved into a growing number of financial services. The Apple Card has emerged as a very popular virtual/physical credit card offered in partnership with Goldman Sachs (NYSE:GS). Expectations are that Apple will continue to add Fintech services to its devices over time. Apple has partnered with several other big tech firms to lobby Congress on financial services via an entity called Financial Innovation Now (FIN). Perhaps one day, there will be an Apple Digital Bank.