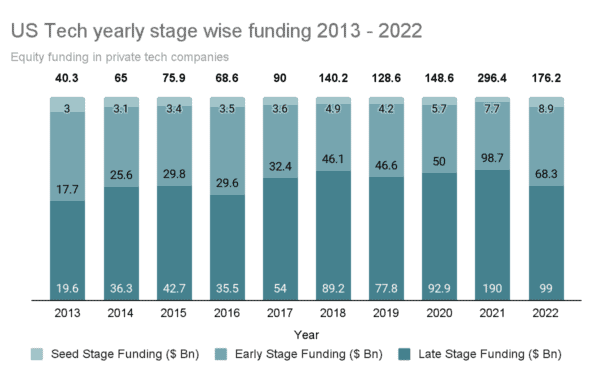 Funding into US startups has dropped by a precipitous 40%, according to a new report. In 2021, startups raised $296 billion. During 2022, this number has declined to $176 billion, a dramatic decline for a key sector of the economy.

Entrepreneurship and small businesses are key drivers of economic growth and prosperity. Giga high inflation and rapidly rising interest rates are taking a toll on the innovation sector, with no end in sight for the stalling economy. According to Tracxn, a SaaS market intelligence platform, the drop in capital for startups has been driven by a 48% decline in late-stage investments to $99 billion during 2022 from $190 billion in 2021. The Traxcn Geo Annual Report: US Tech 2022 states there was a significant drop of 45% in the number of $100 million+ funding rounds, to 444 rounds in 2022 MTD from 808 rounds in 2021.

The best-performing sectors during 2021 were Enterprise Applications, Fintech, and Life Sciences.

The total funding raised by the Enterprise Applications sector in 2022 was $82.7 billion, which is higher than the amounts raised by the Fintech, Life Sciences, and HealthTech sectors combined.

The report says that crypto is struggling with significant drops but blockchain firms did well in 2022, with only a small drop of 4% in overall funding in 2022 versus the same period last year.

Unsurprisingly, the number of IPOs tanked by 85% to 45 this year from 317 last year.

In spite of high taxes and profound problems, the Bay area remained the top investment hub with San Francisco attracting total investment of $29.8 billion in 2022, higher than the amounts raised by New York City at $19.2 billion and Boston at $6.3 billion.