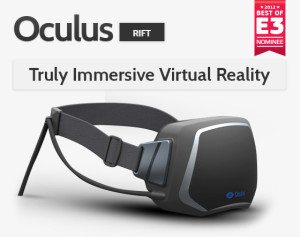 Forbes alludes to the involvement of Founders Fund in the round as a particularly advantageous feather in the cap of Oculus VR. The VC firm launched by Peter Thiel and other early PayPal stakeholders is extremely well connected.

Last year Oculus VR raised over $2.4 million on Kickstarter for their Rift 3D gaming headset, cementing a place as one of the most successful Kickstarter projects of all time.

“Oculus began with a single mission: to put players inside the game,” said Palmer Luckey, founder of Oculus VR and inventor of the Oculus Rift. “This investment allows us to deliver immersive and affordable virtual reality to players everywhere.”

“In this business, there are only a few rare companies that can so perfectly embody the future you read about in science fiction novels,” said Antonio Rodriguez of Matrix Partners. “What Palmer, Brendan and the team are building at Oculus so closely matches the Metaverse, we had to be part of it. Working with them to get this platform to market at scale will be enormously exciting.”

The additional funding will help Oculus VR bring the rift to market. The original Kickstarter raise funded the development of dev-grade hardware, but this funding round will help the team begin to build out production-ready units. Whereas the dev versions sported a 720p display, a new prototype production unit showed off at E3 had a 1080p display.

Now, watch this 90 year old woman freak out while trying the Oculus Rift