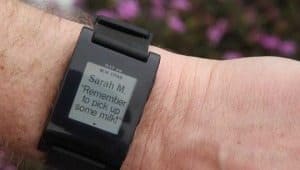 Pebble has joined Ouya in raising $15 million in venture capital after a hugely successful Kickstarter campaign. In Pebble’s case, the round was led by Charles River Ventures and partner George Zachary. Zachary said this was the largest Series A he has ever participated in.

Oh, the irony. Pebble took to Kickstarter after being rejected by numerous VCs. They found it a bit easier to secure financing with tens of thousands of preorders and the most successful Kickstarter campaign of all time under their belt. They closed their campaign a year ago with $10.2 million pledged, representing preorders of over 70,000 units.

Pebble can now boast over 600 apps and over 5,000 watch faces and games. The funding round is expected to help Pebble fend off competition from entrants like Apple and Google, both of whom are rumored to be releasing similar devices soon.