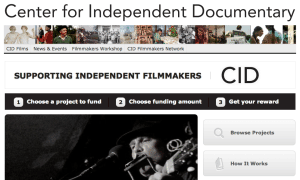 The Center for Independent Documentary has chosen Mimoona as the service provider for their new documentary-focused crowdfunding platform.

CID’s platform is a rewards-based platform that allows any documentary filmmaker to list on the site. Both fixed and flexible funding options are available.

The Center for Independent Documentary was founded in 1981 to collaborate with independent producers to create films and videos on issues of contemporary social and cultural concern. These programs have been broadcast nationally and locally on public and cable television, won numerous awards, and are in distribution to educational markets worldwide.

At a Massaachusetts state house ceremony, the Center was awarded the Commonwealth Award as Outstanding Cultural Organization in Massachusetts by the Massachusetts Cultural Council for excellence, dedication, and vision in giving voice to independent New England documentary filmmakers and for broadening the audience of this medium.