“In signing this bill into law Governor Walker said loud and clear, “Wisconsin is Open for Business”. No longer will our state watch as other states lead the way in opening up capital access to our small businesses, and no longer will our state treat its job creators like they are located on Wall Street instead of Main Street. 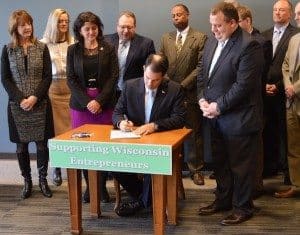 “I want to thank my co-authors, Senator Leah Vukmir and Representative Chad Weininger, and members of the legislature from both sides of the aisle for their hard work in ensuring that our state’s small businesses do not have to watch from the sidelines as other states harness the power of technology and the free market by ending “New Deal” era ideas.”

Governor Scott Walker went to the University of Wisconsin’s University Research Park (URP) to sign the new bill into law. The bill provides a state crowdfunding exemption cut from the same mold as other intrastate efforts in states like Georgia and Kansas.

In another statement, Rep. David Craig (R-Town of Vernon) drummed the bill’s ability to deploy capital for Wisconsin’s small businesses.

“Our state legislature has said loud and clear that it is time for Wisconsin to lead the nation in access to small business capital,” he said. “While other states have attempted to take advantage of technology to connect businesses with investors, the CASE for Jobs Act takes a comprehensive approach to free up the capital our small business people need.”

One interesting aspect of this bill is the relaxing of standards for becoming an accredited investor in the context of state securities. Income requirements are cut in half as compared to the federal standards baked into Regulation D; those filing taxes individually have to make $100,000 per year to become an accredited investor, and joint filers have to bring in $150,000. Accredited investors are allowed to invest an unlimited amount of funds under this soon-to-be law.

Accredited investors can invest up to $10,000 per year in Wisconsin businesses.

Under proposed federal rules, audited financials are required for companies seeking to raise more than $500,000 and funding is capped at a $1 million yearly maximum. Under Wisconsin’s bill, those thresholds are doubled.

The next state to move will likely be Michigan, with legislators in that state predicting the governor’s signature by the end of the year.

UPDATE: According to CraftFund founder David Dupree, equity crowdfunding in Wisconsin won’t commence for at least six months despite this bill becoming law. This grace period is meant to give the Wisconsin Department of Financial Institutions time for implementation.

CraftFund is an equity crowdfunding platform focusing on the craft beer and craft food verticals.