Neurio Home Intellegence, by Energy Aware in Vancouver, just closed their crowdfunding campaign on Kickstarter having trumped their $95,000 objective by raising over $260,000 CAD.  Almost two thousand supporters jumped in the smart home tech campaign with the majority opting in for the reward level that promised backers the opportunity to be one of the first to use their technology.

In an update to supporters the Neurio campaign shared their success: 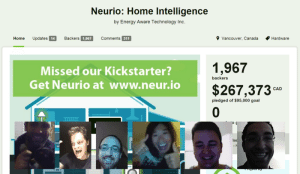 After months of preparation and an incredible 30 day campaign, Neurio was officially funded at 5AM PST this morning! We all set our alarms and gathered via Google Hangouts to cheer as the clock ticked down to zero. We captured a screenshot to share the moment with all of you.

We also marveled as our last backer somehow snuck an order in with zero seconds left to go. Well done!

Our sincere thanks to all of our backers, friends and family for making this possible. The response from the community has been extraordinary, and we’re incredibly excited to bring Neurio to your homes. In the months until delivery, we hope that you’ll stay in touch by joining the conversation on our forums, and following us on Facebook andTwitter.

If you know anyone who would like Neurio, but missed out on the campaign, we are nowoffering it for pre-order from our site. For the first week, all the packages are 30% off their retail price, so your friends and family can still get a great deal.

Their final stretch goal of surpassing $250,000 was hurdled just a few days prior to campaign close.

Neurio is a unique new technology that can identify what each appliance in the home is up to in real-time, from a central sensor. Using this information, homeowners can make their homes more intelligent, and also figure out how much money they are spending on each appliance. 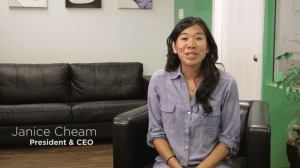 “In a world filled with internet connected devices, it is surprising that we aren’t connected to our energy consumption,” said Janice Cheam, President & CEO of Energy Aware, “People have been plugging devices into the wall for decades, yet we have no way to really know what is happening after that. Neurio finally lets us understand and control our electricity use like never before.”

Estimated delivery for Neurio is scheduled for June 2014.