Most politicians are ineffective narcissists with a single objective of maintaining their position in public office while accomplishing as little as possible.  Yes I admit I hold our elected class in low regard but after working with them in our nations capital for a few years, I saw enough to confirm my biggest concerns.  The only thing more perplexing is the fact we keep electing the same people, sending them back to the District of Columbia continuing the cycle of ineptitude –  so I 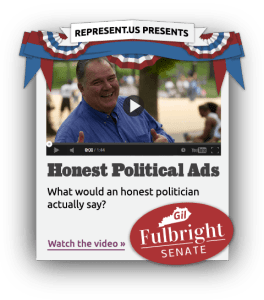 guess we have earned the democracy many of us want.

But some of us do really want change.  Recently the MayDay Pac raised $5 million with a self crowdfunding campaign.  MayDay wants to fight fire with fire by financing new candidates for office that actually follow through with their commitments.  Now we have a new entry into the political crowdfunding realm – Gil Fulbright.

Gil is the creation of Represent.us an organization that wants to build  a non-partisan movement to pass tough anti-corruption laws in cities and states across America, and end the legalized corruption that has come to define modern politics.  Lawrence Lessig, the creator of MayDay Pac is even on their board of advisors.

Gil Fulbright in his “honest” campaign commercial he states that he will say anything you want him to say – just as long as he gets elected.  That sounds about right.  A few gems from his video where he explains that he will craft a version of himself that will appeal to you:

I think Gil has hit a nerve somewhere.  This fake candidate has raised over $72,000 crowdfunding on Indiegogo to enter his “campaign” into the race in Kentucky against Mitch McConnell and Alison Lundergan Grimes.  Over 1300 supporters have kicked into this project.

The campaign in Kentucky between McConnell and Lundergan Grimes is expected to be one of the most expensive Senate campaigns in history.  Well now you have a choice.  So head on over to Indiegogo and pitch in for an honest candidate.  Or just watch the video below as it will put a smile on your face while you shake your head in wonder as to was has become of America’s democracy.