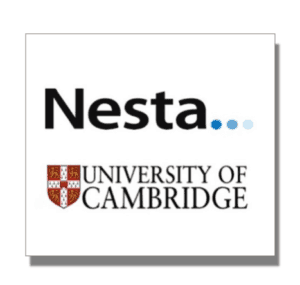 Innovation charity Nesta has partnered with Cambridge University to launch the largest study ever on crowdfunding and other new forms of alternative finance.  Their research also includes the rewards based variant like Indiegogo, Kickstarter and Crowdfunder.  Nesta has the backing of Parliament, the UKCFA and Parliament – so pretty much everyone is in on this one.

Nesta, an organization that is well known for their quality research, has corralled all the major crowdfunding platforms to help promote the initiative.  Nesta states that crowdfunding is growing in both number of platforms, offers and total money invested (contributed) but still very little is known about the disruptive form of finance.  Nesta is hoping to draw some information on the differences between traditional finance and internet propelled capital formation.  They hope to better understand public opinion and gather data on users.  Nesta states;

“Our hope is that through this research we will be able to develop a richer understanding of crowdfunding as a model for alternative finance, and gather insights from entrepreneurs, policy makers and politicians on how to make to the most of crowdfunding potential in getting great projects off the ground and supporting economic growth.”

Nesta previously did a widely quoted study on crowdfunding released late last year – something frequently referenced in Crowdfund Insider.  UK alternative finance grew by 91% in 2013 going from an estimated £492 million to £939 million.  This amount included £463 million worth of “early stage” growth.  Nesta “cautiously” predicts the UK Alternative finance market to grow to £1.6 billion this year and will provide £840 million with of business finance for startups and SMEs.

So if you have 5 minutes to spare – give it a visit and answer the questions. Who knows maybe you will walk away with a free iPad.