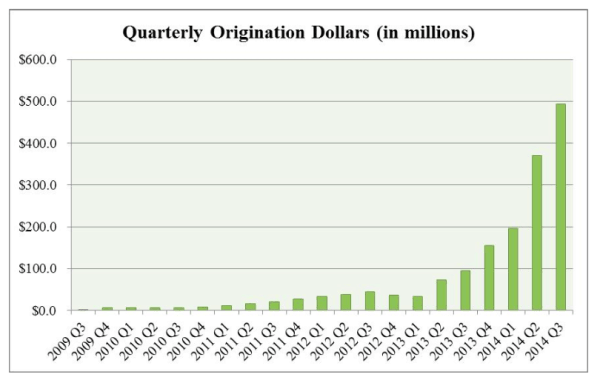 Prosper, a leading peer to peer or “marketplace” lending platform, Q3 results are available via their 10Q filing at the SEC.  According to the document $493 million in loans originated on the platform for the 3 months ending in September.  This was generated by a total of 37,439 borrower loans (avg. $13,168). This compares to 9,143 borrower loans totaling $94.8 million originated during the three months ended September 30, 2013 (avg. $10,368). Year to date for 2014 approximately $1.3 billion in loans were originated by the financial firm. Prosper generates income via servicing and origination fees in processing these loans.  For  Q3 the company showed net income of $2.724 million versus a loss in the same quarter a year prior.  Prosper notes that it has been cash flow positive for 9 months and is currently well capitalized.

In a statement from the company they noted that October originations set a monthly record facilitating $177 million in loans, an increase $50 million or 254% compared to October 2013.  Prosper drew a comparison to the $1.2 billion competitor Lending Club delivered in Q3, stating that Prosper now stood at 41% of their size.

Prosper has grown rapidly and likes to highlight the fact the company took 8 years to generate $1 billion in loans with the next billion in loans taking place 6 months later.  Much of this dramatic growth has been fueled by institutional funds and growing borrower demand.  Leveraging the internet, Prosper delivers a far more efficient and user friendly approach for consumer loans in stark contrast to using a bank or other alternatives. 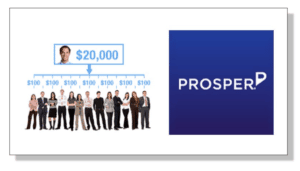 The dramatic expansion of the company has also compelled prosper to move into new offices.  The San Francisco based firm will shifting to new headquarters this December moving from 15,000 sq. ft. to 42,000 sq. ft. so they have plenty of room to grow.

There has been growing speculation as to whether or when Prosper will file for an IPO.  Lending Club is expected to release their IPO before the end of the year.  Several other P2P lending platforms have announced or mentioned their intent to publicly list shares. Prosper has been coy stating they are considering all options.