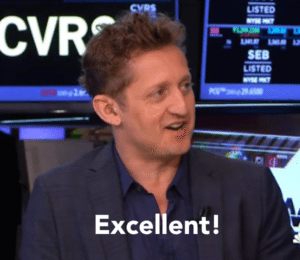 If Alex Winter’s name does not ring a bell, but his picture looks familiar, you are probably not alone. Winter has been fortunate enough to play a leading role in two cult classic films including Bill and Ted’s Excellent Adventure with Keanu Reeves and Lost Boys with Kieffer Sutherland (and others). Winter’s is a talented guy who operates behind the camera too having recently crowdfunded on Kickstarter Deep Web: The Untold Story of Bitcoin and The Silk Road where he raised about $78,000 to help produce his film.

Recently Winter joined the crew at CNBC to discuss Ross Ulbricht’s trial (the Silk Road creator) and chat up his film which will premier on Epix this Sunday (May 31st).  He previously did a film called Downloaded about the rise and fall of Napster (the original music streaming site). Deep Web deals with the seamy side of the internet – a portion of the web the majority of people never visit. Winter states that every interview he did for the film was a “jaw-dropper”. He says that even the people he met who had “criminal intent” they were very bright and very adept….  Deep Web sounds like a great film.