Just a few days ago,  Zach “Danger” Brown, the guy behind Kickstarter success “Potato Salad,” announced that the famous crowdfunding platform quickly removed his new campaign, which is to help him get his very own jet ski. 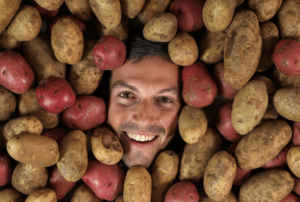 Brown returned to Kickstarter to secure funds to purchase a Jet Ski watercraft and, using space and machinery at the Columbus Idea Foundry in Franklinton, Ohio to grind the entire watercraft into powdery dust. He wrote:

“I was at a small man-made lake here in Columbus and saw this kid doing donuts in a sweet Jet Ski. At that moment, I knew I wanted to be a Jet Ski owner. Unfortunately, there’s a lot that goes into being a Jet Ski owner. You need to tow it. You need to live near water.  A few weeks later, my friend Mike and I were talking about starting an art project where we shoot a time lapse of us filing a car down to powder and I was like “buddy, we’ve got to buy a Jet Ski.

“I’m going to rent a space at The Columbus Idea Foundry (the largest maker space in the world) and store it there. I’m going to do a time lapse of the thing being drained of oil, disassembled, and powderized. I’d really love to partner with Blendtec and see if you can blend a whole jet ski. That’d be awesome.” 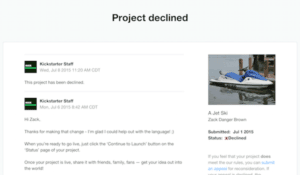 Despite initially being approved (but needed some improvements), the project was changed to declined. Brown revealed:

“They had [Kickstarter outreach team member] Taylor call me eight hours or so after he sent that really supportive email and tell me it was off. He said they were worried about perception. I asked if there was anything I could change, and he said, ‘no.'”

As a response to Kickstarter’s decision, Brown decided to turn to its competitor, Indiegogo, for the project’s funds. He stated in the new funding project’s description: 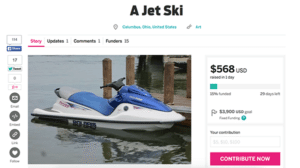 “It is seriously very hard to reduce a Jet Ski to powder. Someone might buy the one pictured above. If this one sells before the project is funded, we’ll obviously have to buy a different one. What happens if you accidentally inhale some or a lot of Jet Ski powder? If you add water to a powdered Jet Ski, is there any chance it will reconstitute into a full Jet Ski (and other science questions)? You will not technically be a Jet Ski owner. Instead, you will own a bit of useless powder and not a whole Jet Ski.”

Brown shared with Mashable that he would like to donate proceeds to charities working to protect the country’s waterways. He also noted: 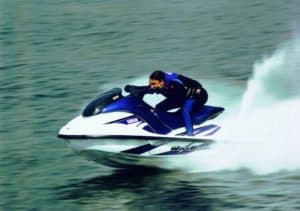 “Every ‘second Kickstarter’ creator tends to hedge a lot about whether or not their new campaign will be as successful as their last. I think the jet ski project will be a lot of fun, but we’re not going to base success on number of backers or dollars raised.”

Unfortunately, the project, which went live on Monday morning, has yet to gain any funding momentum (unlike his previous success on Kickstarter). Since its launch, the campaign has only raised $568 of its now $3,900 goal.

The campaign is set to close in mid-August.