Well, there some good news for Woolfe – The Red Hood Diaries backers after all! Back in August, the developer behind the game, Belgium-based GRIN Gamestudio, announced that it was bankrupt and that it wasn’t going to be able to give Kickstarter backers some rewards. 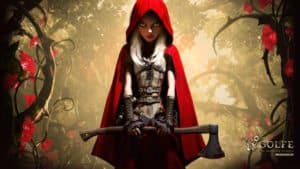 “The team is now dismantled and we have requested bankruptcy unable to pay outstanding bills. I guess our public silence the last few months already said a lot. It is not out of disrespect that our communication dropped to almost zero… it is out of shame. It is truly devastating to read the negative comments we received by some press and players. With Woolfe being the most passion driven thing we have ever created, it feels horrible to live with the feeling we let you down.

“This is not just the end of Woolfe, but the end of the studio that I founded and nurtured through ups and downs the past 13 years. In 2002, when I founded GRIN with 2 partners, it was our goal to develop independant games. At the time we were focussed on browser based 3D games. Not an easy market to make a living from at the time. Less than 2 years after we started my 2 partners stepped out; there just wasn’t enough work to go round.

“While not losing my passion and still spending every minute of spare time, I generated my basic income doing work-for-hire jobs. Every year the company grew a little stronger, a little better, a little more stable. Until 2 years ago, GRIN had 5 full-time employees exclusively making games for clients, we even made enough money to save a little cash on the side. We would use these savings to create the game of our dreams. Little did we know this would be the beginning of the end…”

He then went on to add:

“The people that believed in us from the beginning? People we made promises too. People we have let down. Even worse… people we will not be able to give the full rewards they invested in.

“The crazy thing is, that we have most of the rewards ready for postage. All the backer stickers and letters of enlistment just need a stamp. All the poster sets printed, signed and ready. The artbook is ready to be printed, the soundtrack is ready for distribution, the DVD case is ready for production. But we have literally no money whatsoever to pay for stamps, let alone print the artbooks and dvd-cases.”

Fortunately, nearly two months after the depressing update was revealed, it was announced that Grim (or what’s left of it) is now teaming up with developer Rebellion.

Jason and Chris Kingsley, Co-founders and owners of Rebellion, shared: 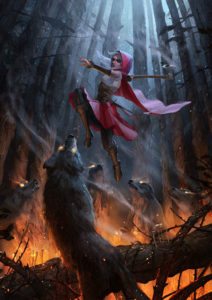 “In August, GRIN’s founder Wim Wouters wrote a brave and searingly honest statement about the sad closure of the studio and the end of Woolfe as they knew it. If you missed this, then we highly recommend you read Wim’s post before continuing. But in summary, GRIN was unable to continue as a business and had to apply for bankruptcy, and so Woolfe (and everything related to the game) was put up for sale at auction.

“It has been a difficult time for those involved with Woolfe and for you, the backers, but today we’re writing to tell you that Woolfe is still alive, and now in the hands of a new owner, Rebellion – that’s us! We’re delighted to add Woolfe’s gorgeous, twisted universe to our burgeoning list of indie games and we hope you’ll join us for the ride.”

Explaining more details about their company, the Kingsleys stated:

“For those who don’t know us, we’re an independent games studio with headquarters based in Oxford, in the UK. 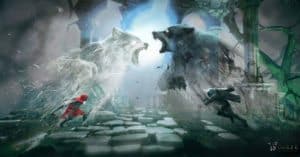 “We’ve been around for 23 years and we’re probably best known for the Sniper Elite series (which has just turned 10 years old!), Zombie Army Trilogy, Rogue Trooper and of course the seminal Aliens vs Predator games.
“We aren’t just a games company either; We own legendary British comic 2000 AD (most famous for Judge Dredd) and several of the best sci-fi and fantasy book publishing houses too. In a nutshell, we’re a studio that loves making games, books, comics … anything we’re passionate about! Our owners Chris and Jason were even executive producers on the critically-acclaimed Dredd 3D movie (2012) starring Karl Urban.”

In regards to why Rebellion decided to purchase Woolfe the Kingsleys noted:

“Aside from developing our own IP, Rebellion occasionally acquires unique and exciting projects from other developers, and we like to think we have one of the most diverse games portfolios out there. 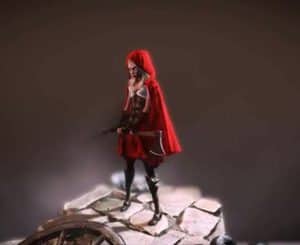 “Interestingly, our book imprints have published quite a few dark and twisted retellings of classic tales, and so Woolfe’s gorgeous, twisted take on Red Riding Hood immediately caught our interest when we heard it was up for sale.
“But aside from our experience of self-publishing games on Steam for PC, we dug a little further and discovered many of Woolfe’s Kickstarter backers had still not received their rewards. With our connections to merchandise companies, book printers and the like, we realised we’d also be better placed than most companies to step in and provide backers with their rewards.”

Rebellion will also release the following rewards to backers:

“Our aim is to deliver all these rewards to backers by the end of the year. Some items might take longer than others, and some may have to be changed from their original specification depending on the assets inherited from GRIN, but we’ll keep as close to original designs as practically possible.”

Rebellion will continue to remain in contact with backers through its social media and Woolfe’s Kickstarter pages.