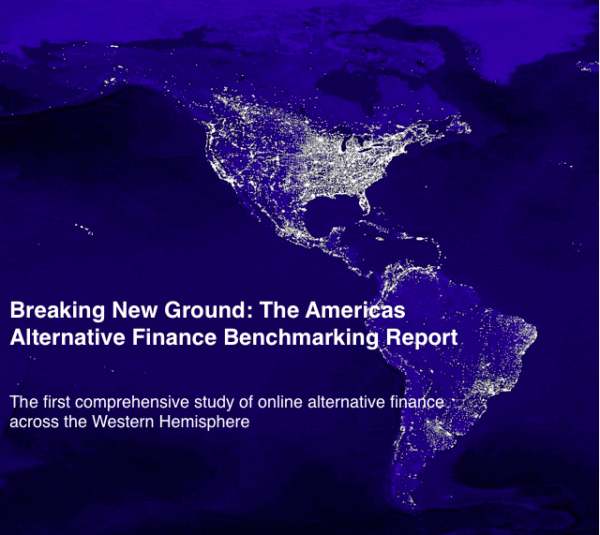 The Cambridge Centre for Alternative Finance, along with their project partners the Polsky Center for Entrepreneurship and Innovation at the University of Chicago, KPMG and the CME Group Foundation, have published their much anticipated report on alternative forms of finance for the Americas.  The newest study entitled “Breaking New Ground: The Americas Alternative Finance Benchmarking Report” finally quantifies the amount of finance in the region that is shifting to the internet. The Centre has recently published data on Asia and the United Kingdom. Continental Europe was reported on last year. The evolution of finance moving onto the internet is a global phenomena but each individual market is adapting in different ways driven by both culture and regulatory environments.

The research covered various forms of internet finance including crowdfunding, both investment and donations/rewards, and marketplace/P2P lending.  The report utilized a definition of alternative finance, as use of instruments and channels of finance that emerge outside of the regulated banking system in both developed and developing economies. 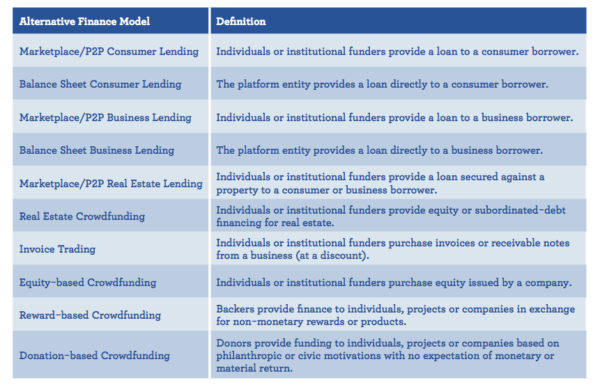 According to the research, in all of the Americas for 2015 $36.49 billion in market volume occurred – a significant jump versus 2014 where that number was pegged at $11.4 billion. Over 250 platforms were surveyed including 178 in the US and

Canada. The authors noted that China remains the largest alternative finance market in the world. The US holds the title of most market volume per capita (at $113.43).

Robert Wardrop, the Executive Director of the Cambridge Centre for Alternative Finance, described the Americas as being more complex;

“In contrast with other markets that we have analyzed, the Americas region stands out for its complexity. This reflects the sophisticated financial markets and correspondingly complex regulatory environment in the region, but also illustrates the proficiency of the entrepreneurship ecosystem for deployment of technological innovation at scale.”

Robert Rosenberg, the Director of the Entrepreneurial Programs at Polsky Center for Entrepreneurship and Innovation, noted the research was truly the first of its

kind.  The report has now established a benchmark for future research in the region.

“As the first comprehensive study of online alternative finance across the Western Hemisphere, this report establishes baselines for annual surveys that will chart the impacts of technological and societal changes, as well as in competition, economic conditions and regulation.”

As one may expect, the United States was the driver here. Approximately all of the internet finance, or $36.17 billion occurred in the US. Overall, Marketplace / P2P Lending was the most significant source of activity. This is similar to previous studies by the Centre as providing access to credit is quickly moving online. The sector of Marketplace / P2P Consumer lending dominated at $25.74 billion. Balance Sheet consumer lending came in a distant second at $3.09. 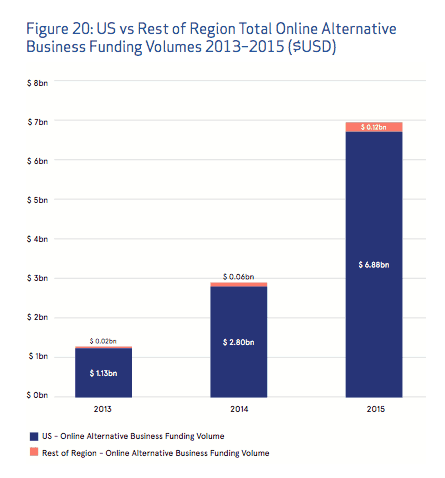 Some interesting points to note: 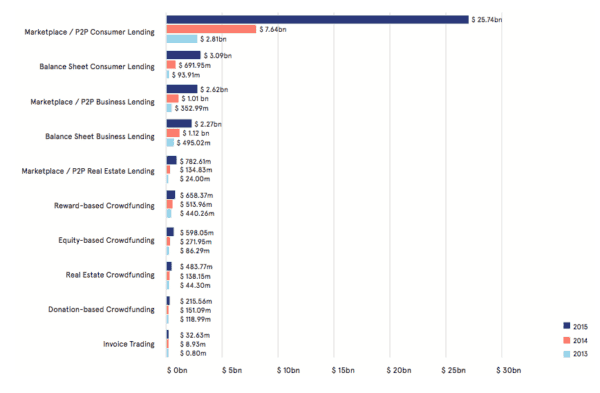 Fiona Grandi, Partner and US FinTech Leader at KPMG, said that 2015 was a “year for Financial Services disruption”.

“…the pace of disruption is sure to accelerate, forging the need and appetite for collaboration among incumbents and non-bank innovators. Although many questions persist, one point is clear: innovation will continue.” 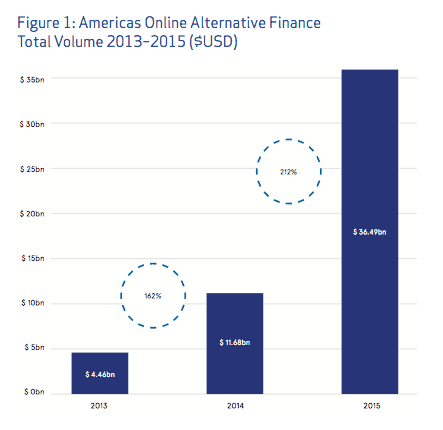 Rumi Morales, Executive Director of CME Ventures, commented that while the US clearly leads the region, other parts of the Americas are witnessing important developments in these innovations.  Morales described these disruptive innovations as improving access to capital, mitigating risk and advancing the global economy.

While alternative finance is quickly moving mainstream, new forms of finance still have a long way to go to challenge traditional forms of finance. Regulatory questions remain a risk and future rule changes may improve the environment for Fintech innovation or may hobble growth going forward.

“The potential offered by new tools and technologies to provide financing through alternative channels is becoming increasingly relevant … By broadening investor access to projects that would otherwise not receive attention from traditional sources, alternative finance can contribute to narrow the financing gap affecting SMEs and entrepreneurs, especially those at the early stages of business development,” stated Juan Antonio Ketterer, from the Inter-American Development Bank.