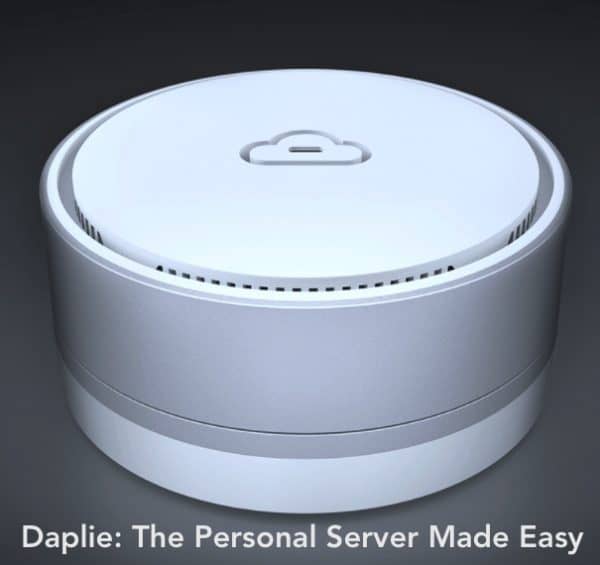 We wrote about Daplie last year when the company decided to launch a side-by-side rewards/investment offer on both Indiegogo and Wefunder. Now Daplie is back on Wefunder looking to raise additional money.

The Daplie offer on Indiegogo raised $682,000 and is now using In-Demand. The first offer on Wefunder raised $749,000. Today, Dapilie is looking to raise another $570,000 using Reg CF.  According to the deal terms, Daplie is offering up to 16,600 shares of common stock in their company. Daplie has set a pre-money valuation of $18.6 million. Basically you expect Daplie to be worth more than that amount plus money raised at some point in the future.

So what exactly is Daplie and what does it do?

Just about everyone has a cloud based account today. Whether it is DropBox or Google, we are storing our emails, photos, movies and more in the cloud. While convenient, depending on the service you use, you may be handing over your data for other uses.

A quick trip to Google land and their terms of services explain what they can do with your content:

“When you upload, submit, store, send or receive content to or through our Services, you give Google (and those we work with) a worldwide license to use, host, store, reproduce, modify, create derivative works (such as those resulting from translations, adaptations or other changes we make so that your content works better with our Services), communicate, publish, publicly perform, publicly display and distribute such content.”

Ok. So basically you hand over the keys to your digital existence if you are using Google.

Daplie wants to fix this problem. Daplie is a hardware and software service that brings the cloud home. A single Daplie server, according to the Indiegogo In Demand page, costs $295. You can then stack Daplie storage on top of each other and configure how much data you want to store. Daplie Connect can download all of your digital content from your phone, tablet, computer, and other cloud storage services to a physical unit you keep at home, or even a network of Daplie Connect devices you trust. Using a private domain name (i.e. yourname.net) you then have access to everything, anywhere, minus the monthly fees.

The concept is kind of cool but can the Daplie team pull it off?

The In-Demand campaign has experienced delayed delivery like many other rewards based products. But the company is confident production Daplie’s will be rolling off the manufacturing line soon with wide, commercial release expected for Q3 of 2018.

Daplie is accepting both accredited and non-accredited investors on Wefunder. As do most other Reg CF crowdfunding campaigns, the issuing company will shift you into a Reg D offering if you are accredited. This can help a company raise more than the ridiculously low $1.07 million Reg CF funding cap.

So if you are tired of your data being used by Google to send you spammy ads or sick of Yahoo allowing your accounts to be hacked you may want to check Daplie out – either as a purchaser or an investor.