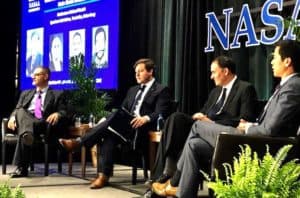 The North American Securities Administrators Association (NASAA) held a public policy roundtable this week in Washington, DC. One of the big topics of the gathering was “What the Rise of Cryptocurrency Means for Investor Protection.”  NASAA is the group that represents state and provincial regulators. These regulators possess a wide ranging authority to pursue acts of financial fraud and address state compliance issues.

While CI was unable to attend the event, a series of tweets are indicative of an interesting discussion on cryptocurrency. NASAA has been at the forefront of pursuing allegations of fraud in the initial coin offering space (ICO) and the lobbying group has set up an entire section of their website outlining enforcement actions and warnings to consumers.

“…not all companies using cryptocurrency/blockchain technology are fraudulent. I know there are real companies engaged in legitimate activity in this area. It’s hard for them to compete against those who don’t follow the rules … When it comes to cryptocurrencies and ICOs, we’re very concerned about fraudulent activity in this area. … There’s a lot of fraud going on.”

“This is an area that we’re going to dedicate significant enforcement assets for the near future. We really need to coordinate among regulators to leverage our resources,” stated Iles.

Iles added that, at least in Texas, they are just enforcing existing laws;