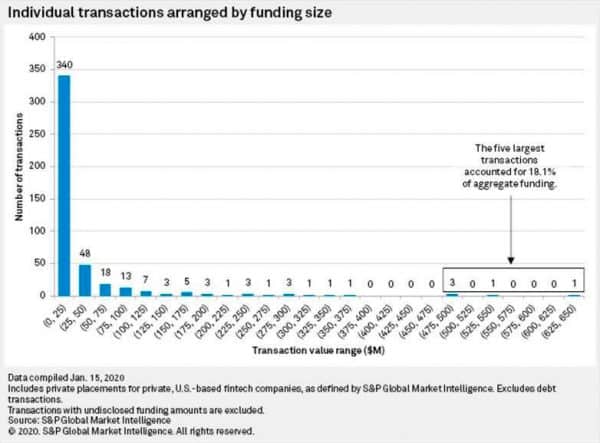 We have already seen multiple Fintech funding reports for 2019. Today, S&P Global Market Intelligence is distributing their spin on the numbers targeting the US only.

According to this report, Fintech companies in the US raised $14.8 billion in 2019.

Of the six Fintech segments S&P tracks, Insurtech stood out with the largest total amount raised.

Insurtech saw $3.8 billion of funding in 2019 buoyed by an outsized investment in Bright Health Management Inc. in December.

Chime raised the most capital of any individual US fintech company in 2019, according to S&P. The definition of banking is being blurred as a growing number of financial service firms are providing bank-like services without becoming federally chartered banks.

Varo Money, a Fintech that has received approval to operate as a bank, is the exception – not the rule, as regulatory arbitrage is how most Fintechs work around the rules.

A new batch of digital banks is in the queue. LendingClub has acquired a digital bank – Radius. Square has filed for an industrial loan charter. And several UK challenger banks have crossed the Atlantic to compete in the marketplace.

The top 10 largest Fintech transactions in the US during 2019, included: