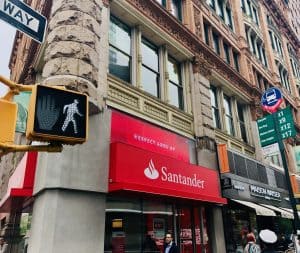 Banco Santander S.A. (Santander Group) (BME:SAN), the world’s 16th-largest banking institution and financial services company based in Madrid, has been focused on cost-cutting measures in order to deal with the economic challenges created by the COVID-19 pandemic.

Banco Santander along with other Spanish lenders are struggling to cope with extremely low interest rates in the euro zone and also a gradual shift by consumers to online or digital banking platforms.

On November 13, 2020, Santander bank’s management decided they would cut around 4,000 jobs (about 14% of its total workforce in Spain, its main market), according to Reuters which cited sources familiar with the matter. Santander is also closing down as many as 1,000 physical branch locations or approximately 32% of its offices based in Spain, the source claim

Santander bank had 28,797 workers on its payroll as of September 2020. These employees are working at the institution’s headquarters which are located on the outskirts of Madrid and 3,110 other branches across Spain. The sources also revealed that the bank might move around 1,000 staff members to other jobs or roles within its Spanish branches.

It’s worth noting that the number of Santander branches since the 2008 financial crisis have almost halved. But Spain still remains one of the European nations with the highest number of branches (globally) per 100,000 adults at almost 50, according to data compiled by the International Monetary Fund (IMF).

European banking institutions have been focused on making significant cost cuts and have also tried to partner with other service providers on various initiatives to further bring down operational expenses.

Caixabank (BME: CABK) has recently confirmed a €4.3 billion (appr. $5.1 billion) acquisition of its competitor Bankia BKIA.MC. The deal may lead to thousands of job cuts after it’s finalized.

Banks around the globe have been struggling to maintain operations due to really low interest rates following the Coronavirus outbreak. Many more consumers now prefer to use all-digital banking services, especially in a post COVID world.

As reported recently, the Bank of India has postponed its plans to launch new physical branches as more consumers are using digital banking platforms.