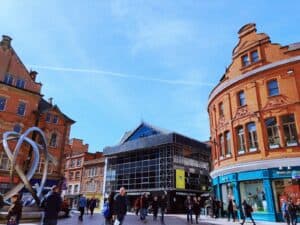 According to the Nationwide House Price Index in the UK, the price of the average house in the country surged by 13.4% YoY in June 2021, which is the largest increase seen in more than 17 years – since November 2004, the Blend Network team revealed in a recent market report.

The UK-based P2P lender noted that there’s a strong base-effect that is “distorting this reading because in June last year prices had collapsed in the aftermath of the first lockdown.”

The Blend Network team also mentioned that there’s now the stamp-duty factor that is contributing to the overall strength of the UK housing market because many buyers have been rushing to finalize their deals before the end of the stamp-duty holiday on June 20, “a measure that translated into a £15,000 saving for those purchasing homes above the £500,000 threshold,” Blend Network noted.

Despite all these factors, the UK market has continued to maintain steady momentum during the last few months and an increasing number of buyers are now paying over the asking price, the Blend Network team noted in a blog post while adding that the average UK house price has now increased nearly £30,000 over the last year and by almost £15,000 YTD.

When examining the key monthly trends, June saw the third straight MoM increase (0.7%), after taking account of “seasonal effects,” Blend Network noted while adding that prices in June 2021 were nearly “5% higher” than in March of this year.

That being said, the MoM growth has “clearly started to ease over the past few months (2.3% in April, 1.8% in May and 0.7% in June),” the Blend Network team wrote while noting that the Nationwide Nationwide House Price Index shows that the average UK house prices increased 10.3% YoY during Q2.

Northern Ireland has seen “a very strong performance,” closely followed by the West Midlands, the Blend Network team revealed while noting that as per recent affordability estimates, the data shared by Nationwide indicates that even though there was an increase in house prices to all-time highs, the typical mortgage payment is “not high by historic standards compared to take home pay, largely because mortgage rates remain close to all-time lows.”

Moreover, the Nationwide house prices are “close to a record high relative to average incomes.” According to Blend Network, this is important because it “makes it even harder for prospective first time buyers to raise deposits.” (Note: for more details and updates from Blend Network, check here.)

As covered, Blend Network recently explained how to use their AutoLend feature to automate the lending process. Earlier this month, Blend Network reported solid Q2 2021 performance, with 1,052 registered investors lending via platform loans.

In an interview with CI, Yann Murciano, CEO at Blend Network, explained how 2020 will be known as the year seeing a decade of digital transformation.