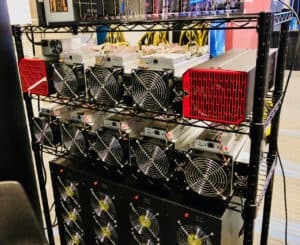 Recently, network difficulty on the Bitcoin (BTC) network surged around 4.8% as total hashrate (or the amount of computing power securing the leading cryptocurrency network) exceeded 200 EH/s for the “first time ever.”

The team at Compass Mining noted that “breaking through mining profitability’s gloomy overcast is a bit of light.” The firm also mentioned that when measured in satoshis (the smallest unit of the BTC currency recorded on the blockchain…it is a one hundred millionth of a single Bitcoin), the percent decrease in mining profitability “is slowing.”

Compass Mining wrote in a blog post, dated February 19, 2022, that Bitcoin mining market dynamics are “changing the game theory behind ASICs themselves.”

According the firm, what was once a hashrate arms race “is quickly becoming one of longevity.”

“Counterintuitively, the rate of hashrate growth year-over-year is actually declining over time as the marginal value of new hashrate added to the network continues to drop. In other words, each additional unit of hash dedicated to the network becomes a lower overall percent of the network’s hashrate.”

For instance, “take the change in year-over-year (YoY) hashrate growth from October 2018 of 454% compared to October 2021 at 13%.” While singular months, they “adequately reflect the larger trend depicted below: the marginal unit of hashrate is having a smaller effect than previously.”

According to Compass Mining’s blog post, a less aggressive hashrate growth “has implications for the ASIC market, particularly around the economics of machine longevity.”

The firm added ASICs are one of the few elastic goods “associated with Bitcoin production.” In economics, elasticity “refers to the relationship of supply and demand in the context of multiple goods or market prices.”

For instance, oil is considered “an inelastic good because an increase in price does not generally change demand for the good.”

But each new ASIC is “marginal to the last.” Even if the industry responds to a general increase in demand for Bitcoin “by creating more miners – as has occurred the last two years – the nature of hashrate growth will limit mining profitability’s downside when measured in satoshis.”

“Notwithstanding a large advancement in ASIC technology, ASICs may no longer be priced out by the next generation machines, but will rely on longevity to reach profitability. The lifetime of the ASIC will need to be stretched in order for it to recover the cost.”

The team at Compass Mining concluded the update by noting that “the old adage goes: ‘time in the market, not timing the market.'”